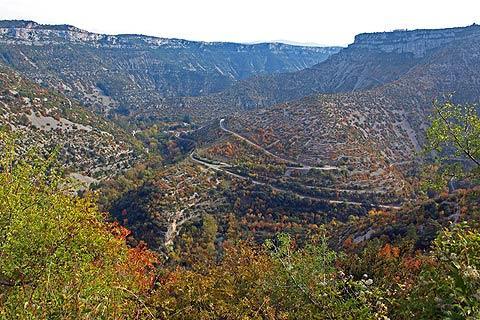 With Ancient Roman monuments such as the amphitheatre at Nimes and the aquaduct at Pont du Gard, fascinating towns including the fortified town of Aigues-Mortes, beautiful villages and the scenic beauty of the Cevennes National Park and the north of the department there is a great deal to discover when you visit the Gard.

The Gard department is part of the Languedoc-Roussillon region of southern France, situated in the area around and to the north of the ancient town of Nimes. The Gard includes a short stretch of Mediterranean coastline near Aigues-Mortes but is otherwise an 'inland' department.

The scenery in the department is very diverse with a great contrast between the Camargue to the south-east and the Cevennes to the north-west, so we have considered the highlights of each region separately:

It is the eastern part of the Gard that attracts the most visitors, with several important attractions here. These include the renowned Roman ruins such as the amphitheatre at Nimes (and the attractive city of Nimes itself) and also the Pont du Gard - a very famous roman aqueduct near Nimes.

Nimes is close to Avignon and Arles (both in the adjacent Provence region) and these will usually be visited as part of the same trip.

Also to the east of the department, don't miss the town of Villeneuve-lez-Avignon and its monuments, on the banks of the Rhone river across from Avignon.

There are also several traditional villages worth exploring in this region including Castillon-du-Gard and Saint-Victor-la-Coste, with its ruined castle above the village.

The twin-towns of Beaucaire and Tarascon are also in the centre of this 'Nimes - Arles - Avignon' triangle if you are exploring the eastern reaches of the Gard department.

West of Nimes you can visit Sommieres, a medieval town and castle in an attractive setting. To the north of here along the Vidourle valley we suggest a visit to the small town of Sauve, while to the south the abbey and associated buildings at Saint-Gilles are one of the best examples of romanesque style architecture in the area.

Although it is not primarily a coastal region, sun worshippers can head for the popular coastal resort of Le Grau-du-Roi between Montpellier and Aigues-Mortes in southern Gard.

Note that although Le Grau-du-Roi is the principal coastal town in the department there are other resorts close to hand in the neighbouring Herault department such as La Grande Motte and Palavas-les-Flots.

While you are near the coast we also recommend that you visit the fortified town of Aigues-Mortes, which has a interesting historical centre and where you can also follow the walk around the top of the fortified walls.

Further east along the coast you enter the Camargue region, a natural park with numerous marshes where you will also see the famous white horses of the region (much of the Camargue is also in the adjacent region of Provence).

Three villages classified among the 'most beautiful village in France' can be visited in the north-east of the department: La Roque-sur-Ceze, in an attractive position on the side of a steep hill; Aigueze above the river on the border with the Ardeche; and Montclus.

Just a few kilometres north of La Roque-sur-Cèze, Cornillon and Goudargues are a pleasure to visit and to the south you will enjoy visiting Saint-Laurent-des-Arbres and Saint-Victor-la-Coste. The regional centre of Bagnols-sur-Cèze is also nearby, and the small village of Lussan to the west of here is an unspoiled traditional medieval village with two castles.

We also enjoyed exploring Barjac to the west of Aigueze with its lovely views and quiet cobbled streets. While close to the border with the Ardeche department we also suggest you visit the small town of Saint-Ambroix and the Upper Valley of the Cèze river. You will find many other small villages of interest here so be sure to allow time to pause and explore as you travel around

There are various scenic highlights close by - the walk along the gorges de l'Aiguillon was our favourite with the path leading through the trees and passed high cliffs.

In this region you are close to the famous Gorges de l'Ardeche and the highly regarded Aven d'Orgnac caves, both situated on the border between the Gard and Ardeche departments.

In the centre-north of the Gard you can visit the historical town at Uzes which has some fine medieval buildings, and also the unusual 12th century castle at Chateau de Portes.

Continuing towards the north-west you pass the attractive small town of Saint-Jean-du-Gard and enter the landscapes of the Cevennes National Park and the southern Massif Central. In the Cevennes you can visit Le Vigan to see a typical small town of the region.

Close to Anduze enthusiasts of oriental gardening will enjoy a visit to the bamboo garden of Prafrance (near Anduze) which features 15 hectares of exotic bamboo planting.

Also close to here at Mialet you can visit the Grotte de Trabuc, an impressive cave system which is the largest in the Cevennes and features numerous water pools and waterfalls as well as a very impressive display of stalagtites and stalagmites.

It is the landscapes of the Cevennes with its forested slopes and open moorland areas, and scenic highlights such as the Cirque de Navacelles (which is officially listed as one of just 33 Grand Sites of France in the country), the Abîme de Bramabiau and the views from Mont Aigoual that are the main attraction of this region.

As elsewhere in the Gard you will also come across small villages hidden away in the hills, often where there are no other tourists to be seen. Aumesas, Saint-Martial and Mialet were among those we enjoyed exploring and also Sauve and Vezenzobres a little further east.

Map of Gard and places nearby

See an index of all Gard communes