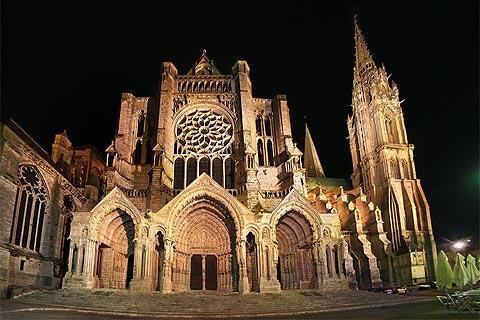 Visiting the Eure-et-Loir department between Paris and the Loire Valley, be sure to visit the famous cathedral at Chartres - but also allow time to enjoy the tranquil countryside of the region, so often passed by in the rush to reach the chateaux of the Loire further west

The Eure-et-Loir department of France is situated to the north of the Centre (Loire Valley) region, south-west of Paris.

Although not home to the most famous chateaux of the region, there are still several attractive castles to visit, and some other unmissable highlights.

The Beauce region occupies the south-west part of the department, and is characterised by flat agricultural land.

Inevitably the focus of most visits, the best known sight here is at Chartres, above all Chartres cathedral which is a protected world heritage site. The town of Chartres itself also contains an interesting old town that should detain you a while.

The most well known castle in Eure-et-Loir is impressively located at Chateaudun - as with Chartres, don't neglect to explore the town itself.

Other castles of interest in this part of Eure-et-Loir include:

One of the most interesting towns here is Bonneval, an attractive small town traversed by canals where you can visit the the Saint-Florentin abbey as well as explore the medieval town centre.

You will also come across several working windmills as you explore the Beauce region - the one at Ymonville is an interesting and unusual 'wooden clapboard' design while the working watermill at Douy is in a pretty setting. To the east of the Beauce you can visit the medieval centre of Gallardon, and at nearby Pierres we suggest you visit the medieval gardens at Jardin de Bois-Richeux, which are an interesting recreation of a 14th century garden.

Note: the town of Illiers-Combray, south-west of Chartres, was featured in the works of Marcel Proust. Originally called Illiers, but referred to as Combray in the Proust novels, it was therefore later renamed Iilliers-Combray in his memory. At Illiers-Combray you can visit Swann Park (designed by the author's uncle).

The Chateau d'Anet is an imposing renaissance style castle north of Dreux.

The Le Perche region is in the west of the department around Nogent-le-Rotrou and also in the neighbouring Orne department (part of the Normandy region) - see Le Perche for details.

Note that the Château Saint-Jean in Nogent-le-Rotrou has attractive views across the town centre rooftops.

Senonches is one of the most important towns in the Perche Regional Natural Park and surrounded by extensive forests, which have established it as a very popular place for walking and cycling.

Map of Eure-et-Loir and places nearby

See an index of all Eure-et-Loir communes