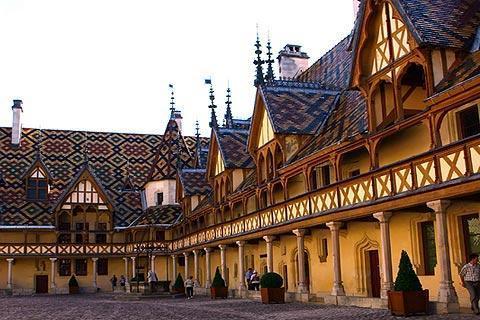 One of the most popular and historically wealthy regions of Burgundy, highlights in the Cote d'Or department include the Abbey at Fontenay, quaint villages such as Flavigny and important historical centres like Dijon. Wine enthusiasts will also enjoy exploring the vineyards along the Route des Grands Crus such as Beaune and Nuits-Saint-Georges.

The Cote d'Or department occupies the north-eastern part of Burgundy, in central-eastern France. The capital of Cote d'Or (and of the Burgundy region) is the impressive town of Dijon.

The name Cote d'Or comes from the golden leaves of the vines in the region.

While the south and east of the department attract the most visitors because of historical towns such as Dijon and Beaune, and the famous vineyards in this region, there is much of interest to discover elsewhere in the department such as the village of Semur-en-Auxois and Fontenay Abbey towards the north-west.

To make your planning easier and help you find places of interest close to your destination we have reviewed the Cote d'Or by region:

The Chatillonais region to the north-west of the department is an extensive protected forested area.

In the heart of the Chatillonais region you can visit the riverside village of Chatillon-sur-Seine, especially well known because of the ancient 'treasure of Vix' found nearby and now on display in a museum in the town. Also in Chatillon-sur-Seine you should visit the lovely 10th century Church of Saint-Vorles.

South-west of here and to the east of Montbard we highly recommend a visit to the world famous Fontenay Abbey, a UNESCO World heritage Site. The extensive collection of abbey buildings here is beautifully preserved and also in a very picturesque setting, and the highlight of your visit to the region!

Between Chatillon and Montbard at Bussy-le-Grand you can visit the Chateau de Bussy-Rabutin - an understated castle, best known for its paintings and interior decoration.

Close to Fontenay Abbey, the town of Montbard is a three star 'ville fleurie' (town in bloom) traversed by the Burgundy canal and a pleasant town to explore. The most important site is the impressive Parc Buffon, named after a famous 18th century French naturalist.

You can find more evidence of Buffon's importance to the region when you visit the nearby 18th century 'Forges de Buffon' or take a stroll through the gardens at Montigny-Montfort castle.

Continuing south from Montbard, be sure to visit the attractive small town at Semur-en-Auxois, with an extensive historic centre and certainly among the most picturesque towns in the Cote d'Or department.

To the east of Semur, Flavigny is a beautiful village with fortified walls and an interesting selection of religious buildings to admire.

The village of Flavigny was made famous when it was used for the setting of the popular film 'Chocolat'. In the village you will also see aniseed being made by local monks.

At Saint-Thibault, south-west of Flavigny, you can see the impressive romanesque style doorway and interior of the 13th century church. Also close to here is the site of Alésia, where Julius Caesar had his final battle with the Gauls, and now listed as one of the 'Grand Sites of France'. Excavations at the site attempt to prove that it was indeed site of the great final battle.

To the south-west of the department the town of Saulieu is best known for its 12th century romanesque style basilica. Saulieu is situated within the the rolling woodland countryside of the Morvan Regional Parc, an extensive natural region very popular with hikers and cyclists.

The Castle Rochepot towards the south-west border of the department dates in part form the Middle Ages and is one of the most attractive and interesting in Cote d'Or, with numerous turrets, a multi-coloured roof, and attractive gardens.

Close to here at the village of Vauchignon we suggest a walk around the 'Cirque du Bout du Monde', a circular cliff in a woodland setting.

Start your visit to the south-east at Dijon, the capital of the department. Bearing many traces of its rich and illustrious past, Dijon has many monuments of interest and is one of our favourite towns in France - and also of course famous for Dijon mustard!

To the north-east of Dijon you can visit the small village at Beze, then to the south-west of the town we recommend you explore the pretty hilltop village at Chateauneuf-en-Auxois.

Towards the southern border of the department be sure to see Beaune, a pleasant town with the medieval Hotel-Dieu (medieval hospital) complex a highlight of your visit. Of course, Beaune also gives its name to one of the most prestigious wine regions in France.

Also close to Beaune, the village of Saint-Romain is in an attractive setting and Nolay has a small but picturesque historic centre with a medieval market hall and houses.

The interesting town of Auxonne on the Saone River to the south-west of here also has several historical buildings including a cathedral and castle and an attractive centre to explore.

Wine enthusiasts will also want to follow the 'Route des Grand Crus' that passes through the Cote d'Or department from Santenay to Dijon, with ample opportunities to try the wines en route and admire the countryside where the grapes are grown.

Among the best known wines from this region are Beaune, Nuits-Saint-Georges, Pommard and Meursault.

Map of Cote d'Or and places nearby

See also a slow guide to enjoying the Cote d'Or

See an index of all Cote d'Or communes