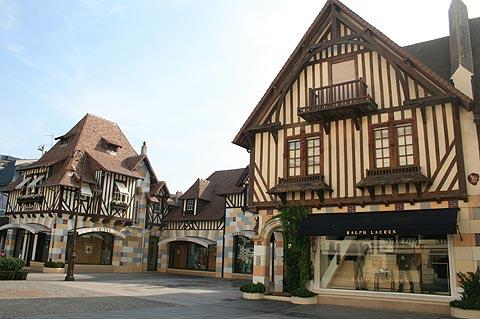 Rich in both history and natural beauty, Calvados is home to the Normandy landing beaches and the Bayeux tapestry, several very popular coastal resorts and lovely countryside. A perfect region for relaxing - or exploring!

Calvados is one of the three departments that make up the Lower Normandy region on the coast of northern France (the others are Manche and Orne).

It is a very popular department with visitors, with some of the most popular destinations in Normandy to be found here such as the Normandy Landing Beaches, Bayeux with its world famous tapestry, and popular coastal resorts such as Deauville and Trouville.

The coast west of Caen, with landing beaches and Bayeux

The most important destination for many visitors are the beaches where the troops landed to begin the invasion of France in the Second World War, close to Arromanches.

Close to the beaches there are also various memorials such as war cemeteries and museums that explain the history of the 'debarquement' as it is known in France. You can find full visitor details at Normandy Landing Beaches.

As well as tributes to the Second World War you will also find that the beaches are extensive, sandy and not too busy even in summer!

While in the region we also suggest you also visit the castle at Creully, which also has a 'D-Day' connection - it was in this castle that the BBC opened its first radio transmitter in France at the end of the Second World War, commemorated in a museum at the castle.

The town of Bayeux is another indispensable destination in western Calvados, to see the cathedral and of course the famous Bayeux tapestry, an immense medieval work commemorating the defeat of the English by William the Conqueror.

For a change from the beaches and coastal scenery, explore the north-west of the Calvados department towards the Cotentin Peninsula and discover the coastal cliffs and marsh environment in the Natural Regional Parc called the 'Parc naturel régional des Marais du Cotentin et du Bessin'.

Caen and the coastal resorts east towards Le Havre

Caen is the principal town in the department, and has a substantial historic centre including a medieval castle and medieval houses (much of the town was reconstructed after substantial damage during the Second World War).

The nineteenth century coastal resorts along the coast east of Caen, are on a stretch of coast often referred to as the 'Normandy Riviera' and the 'Cote Fleurie'.

In the 19th century a train line from Paris to Calvados opened, bringing the wealthy of Paris to the coast here where they built luxurious hotels and mansions. It is still this architecture that sets the character of the coast today.

The towns of Deauville and Trouville are the best known resorts here and have numerous attractive examples of 'belle epoque' architecture as well as popular beaches. In Deauville you will also see the famous 'brightly coloured parasols' on the beach!

Other resorts that are popular with summer visitors to Calvados include Cabourg and Houlgate. The coast around Houlgate is unusual with the low grey cliffs formed from clay hardened over millions of years and now a protected natural environment called the 'Falaises des Vaches Noires' (translation: 'cliffs of the black cows'!)

A visit to the coastal town of Honfleur is also highly recommended, with its harbour surrounded by historic buildings surely one of the most attractive in France.

Other resorts in the region include Villers-sur-Mer and Villerville, and those with an interest in history will want to visit Dives-sur-Mer, the town from which William the Conqueror launched his fleet to conquer Britain

The attractive countryside of Calvados contains orchards, small scale agriculture, and numerous attractive farmhouses, villages and small towns. The department is also well known for the high quality of the local farming produce, cheeses and famous local liqueur, so make sure you visit the local markets so you can sample these fresh products.

The village of Beuvron, south of Houlgate, is very pleasant to explore and to see traditional Normandy architecture, and is classified as one of the 'most beautiful villages in France'. Other charming villages here in eastern Calvados include Pont l'Eveque, Beaumont-en-Auge, Pierrefitte-en-Auge and Blangy-le-Chateau.

These villages are individually quite small and don't take long to explore but are close together, and can all be visited along with Beuvron during a very pleasant day out.

It is here in the countryside that you will discover several important historical monuments. Castles of interest include:

There are also a large number of historic churches, manor houses and castles in Calvados including the imposing 12th century cathedral and magnificent basilica at Lisieux. Close to Lisiux is the beautiful medieval style Chateau de Boutemont whose attractive gardens can be visited.

A slightly more dramatic landscape of craggy cliffs and wooded hills, and a lovely region to explore on foot, can be found along the Orne River in the region known as 'Swiss Normandy' to the south of Thury-Harcourt in southern Calvados.

The Pays d'Auge region around Cambremer to the south-west, best known for the apple orchards from which the local cider is produced, is also a good place to discover traditional Normandy villages, rural architecture (the colombage houses are among the most beautiful to be found in France) and countryside. It is also home to the lovely gardens of the Pays d'Auge.

To add extra interest when you explore the non-coastal regions of Calvados we suggest you follow one (or more) of the several way-marked routes that the tourist offices have designed to pass through particular scenic regions, focussing on particular attributes e.g. scenery, cider, Normandy traditions.

These designated routes include:

Map of Calvados and places nearby

See an index of all Calvados communes