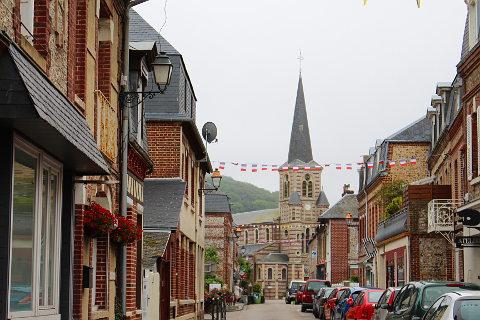 Yport is a traditional fishing village on the Alabaster coast in the Seine-Maritime department of Normandy, between Fecamp and Etretat.

The village is one of the smaller resorts in the region and contains a mix of small fishing houses and larger 19th century properties built at the time that Yport started to become an established seaside resort.

The beach at Yport is a well-maintained pebble beach, with a row of traditional beach huts and backed by various shops and cafes, and is of course the centre of interest for most visitors. The high chalk cliffs beyond and behind the beach are the principal attraction in Yport and make the beach a very pleasant place to pass some time. 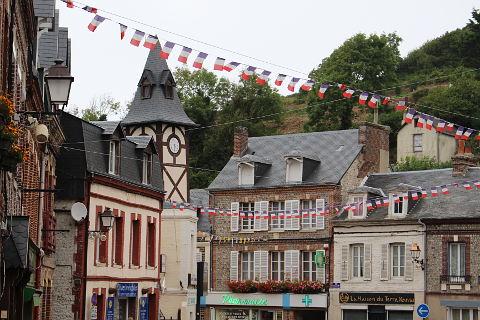 The centre of Yport, although small, has some attractive fishermen cottages and small streets to explore, for example around the Place Jean-Paul Laurens. Notice the Hôtel Normand built in the 19th century which was once a changeover station for the postal service and in the courtyard you can still see the stables used for the postal horses. On the other side of the square is the attractive clock tower.

Exploring elsewhere in the village, highlights to be discovered include the Church of Saint Martin and the 'stations of the cross'. The Mairie is also in a nice half-timbered building called the 'Villa les Roses'. You will also find local facilities such as shops, restaurants and a post office and also a casino.

You will notice the unusual striped design to the church, which is a bit reminiscent of the Pisan style in Italy! There is an interesting story about the Church of Saint-Martin in Yport: in 1838 the villagers decided they would all get together to build the church and started collecting stones and pebbles from the beach and set off by boat to get wood from Fécamp. Then as a team effort, with the women and children of Yport also helping to mix mortar and bring water, they managed to build the church in less than six months.

Yport tourist office has a leaflet explaining the various highlights and a suggested route to follow while exploring. 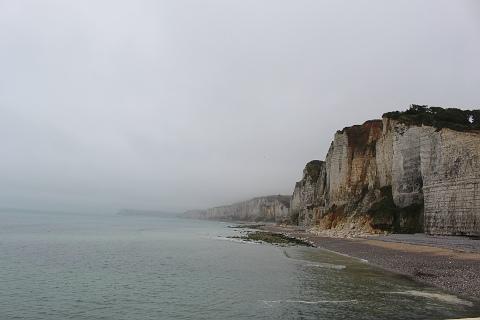 The village is surrounded on both sides by the dramatic sea-facing cliff scenery that is typical of this section of coast. Sat on the beach are a row of blue and white striped beach huts and behind these is a play park for children and also a casino. There has been a casino at Yport since 1865 when sea-bathing became fashionable and towns developed around the beaches.

In the lower part of town the Villa Marguerite and the Villa les Roses are superb villas to look out for.

There is much of scenic interest along the coast in both directions with cliff walks being among the most popular activities. The long walking trails of the GR21 and the GR21B both pass through the town making this a good base if you want to do some walking.

The resort at Etretat is only a few kilometres along the coast to the south-west of Yport and has some of the most dramatic coastal cliff scenery in Normandy.

Map of Yport and places nearby

Visit near Yport with France This Way reviews

Plan your visit to Yport, Seine-Maritime

The French version of this page is at Yport (Francais)