The Village des Bories is a popular attraction near Gordes in Provence where you can see a group of very ancient small stone houses called bories.

From medieval times onwards, as previously unused land became cultivated, it was common for those working the land to need somewhere easy to build that would provide shelter and protection and stay cool in the summer heat. In several parts of southern France - including here at Les Savournins in Provence they found the most practical solution was to build small stone huts.

Bories were not only used for shelter for people - they were also used as places to keep animals or to store things out of the rain, and perhaps as somewhere for the local families to have a 'second home', somewhere to stay simply for the pleasure of the experience. They were not used as permanent homes. 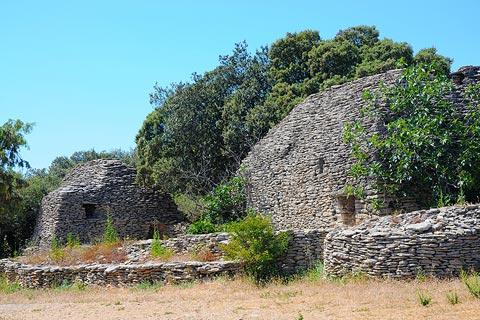 The 'bories' were built from large flat stones about 10 centimetres thick and without any kind of mortar or foundations, so they are essentially just small huts built from dry stone. As the height of the structure increases the diameter of the hut is slowly reduced until a single point or ridge is obtained.

Typically the bories have a doorway and often a very small window higher up. They are often round although rectangular bories are also common.

The 'Village des Bories' near Gordes in Provence was built over a very long period, possibly extending from the 7th century (although some experts maintain that none were built here before the 15th century) to the 19th century, at a farm called the "hameau des Savournins". Until the group was converted to a tourist attraction in the 1970's it was known locally simply as 'the cabins'.

There are almost 30 bories on the site, mostly in a good state of repair (after renovation on the 1970s), and it is fascinating to wander around this small village which consists of several groups of buildings each with several cabins. You can follow the tracks between the cabins which also pass bread ovens, sheep pens and other agricultural buildings.

Of course, we should remember that the 19th century is quite recent build compared to many properties in the region, so although the bories look very ancient you will find that many of the 'proper' houses in nearby Gordes, for example, are older than the more recent bories. It is difficult to date stone huts precisely!

The Village des Bories has been owned by the local Gordes council since 1976, who initially restored and now maintain and operate the village as a tourist attraction. 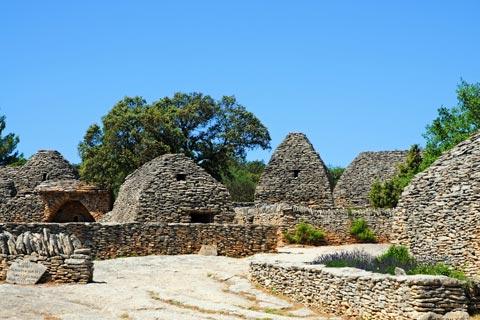 The Village des Bories is a couple of kilometres south-west of Gordes on the D15 road (direction Cavaillon).

Entrance costs around 6 euros per adult, 4 euros per child over 11 years old. Note that the village, while very interesting, is also very small and the tour will only take you about half an hour so 20 euros for a family of four seems rather expensive.

Of course, while you are here you will explore Gordes itself, a very lovely village, and we recommend you also take a trip to see the nearby Abbaye de Sénanque, in a quiet wooded valley surrounded by lavender fields.

Map of Village des Bories and places nearby

Visit near Village des Bories with France This Way reviews