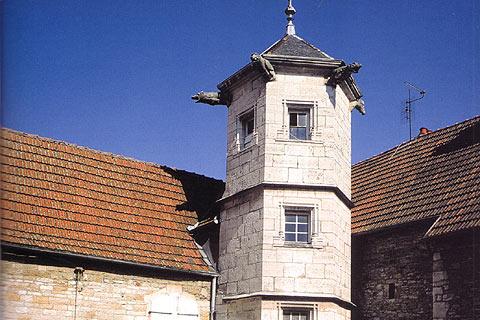 Vesoul is a town in (and capital of) the Haute-Saone-department of Franche-Comte, in eastern France, where it stands at the foot of a hill called the Motte, which also dominates the skyline of the region. It was on the Motte that a castle once stood, and around which the town developed.

Vesoul is quite an extended town with a lot of recent development of little interest to visitors: it is the historical old town that is the focus of a visit, with a good number of interesting buildings and monuments to admire, including the Church of Saint-George and the Palace of Justice.

Vesoul Tourist Office is at 2 Rue Gevrey, in the heart of the old town and is a useful source of information for other highlights in the vicinity, and also offer guided tours of the old town during the summer months.

The Church of Saint-George has a baroque style facade and is in a pleasant square with interesting houses. The surrounding streets contain many houses dating from the fifteenth to eighteenth centuries (the latter being the predominant style in Vesoul). Among our favourites are the Hotel Baressols (2-4 Place de l'Eglise), the Hotel Thomassin (5 Rue Salengro) and the Hotel de Magnoncourt when seen from its courtyard (1 Rue de Mailly).

The town contains all facilities, including a good selection of cafes with terraces, very pleasant on a sunny day. Another nice way to relax is to stroll through the so-called 'jardin anglais', a pretty park with a good selection of trees and flowers and a children's play area.

In the ancient Convent of the Ursulines the museum Georges Garret contains a large number of paintings and artworks, mostly by local artists, as well as a collection of local archaeological artefacts.

Be sure to also go to the top of the Motte, where you will see the Chapel Notre-Dame-de-la-Motte and cross that now stand where the castle once did, and also enjoy some lovely views back across the town: it is true that the walk to get here is quite steep but it is well worth the effort.

Markets are held in Vesoul each Thursday and Saturday morning, with Thursday being the main weekly market.

There are a couple of interesting natural highlights and attractions close to the town, including the Natural Reserve of Sabot de Frotey with a weather-shaped rock formation (thought to look like a hoof, hence the name sabot, which is French for hoof) and views across vesoul and the motte.

Map of Vesoul and places nearby

Visit near Vesoul with France This Way reviews

Plan your visit to Vesoul, Haute-Saone

Regular market(s) are held in Vesoul each Thursday & Saturday. (Markets are held in the morning unless stated.)

The French version of this page is at Vesoul (Francais)