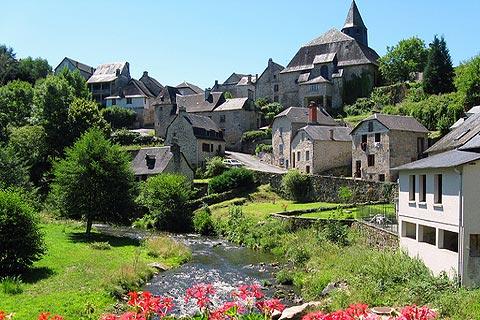 Treignac is listed as one of the 'most beautiful villages of France' and is situated 30 kilometres north of Tulle, in the Limousin region of central southern France. It is a very pretty village on the River Vezere.

There are several interesting medieval houses and features to be discovered within the narrow streets surrounding the 11th century church in the historic centre of Treignac. While you are wandering around look out especially for the highly decorated doors and windows.

You will see that many of the doorways incorporate a carving of the shell, which is the motif (mark) of the pilgrims who passed through here on their way to Santiago de Compostela. You can see one example above the ornate doorway of the Maison Lachaud Sangnier, a refuge where pilgrims could spend the night in medieval times.

There is also an interesting market hall in the town. This hall was originally built in the 12th century but needed to be rebuilt in the 15th century after it was destroyed by someone who was owed money by a nobleman of the town.

Be sure to take a look at the quaint little Chapel Notre-Dame in Treignac which has an unusual spire with a twisted design. Also don't miss the Chapel of the Penitents which was built by the 'brotherhood of White penitents' as a refuge from the Protestants in the 17th century.

To the east of the town centre you can see a medieval tower and to the west is one of the original gateways through the fortified walls that once allowed access to the centre of Treignac. From here you can walk down to the lower part of the town to see the lovely old stone bridge across the Vezere river.

Believed to have been built in the 14th century or perhaps even earlier, the bridge has three arches. From the bridge there is also a nice view back up towards the village, and the Church of Notre Dame de la Basse Cour can be seen near the bridge.

The Lac du Bariousses, a 99 hectare lake close to Treignac, allows for a wide range of water based activities and is popular in the summer season. There are also numerous walks available in the Monédieres region - Treignac tourist office can give you details of these.

Canoeing is practiced on the Vezere river but unless you are particularly expert you will probably prefer just to watch - the river is not at all calm in this region, and only experienced and expert canoeists should try. Indeed in 2000 the world championships for canoe-descents were held here at Treignac, which gives you a clue how challenging it can be!

Map of Treignac and places nearby

Visit near Treignac with France This Way reviews

The French version of this page is at Treignac (Francais)