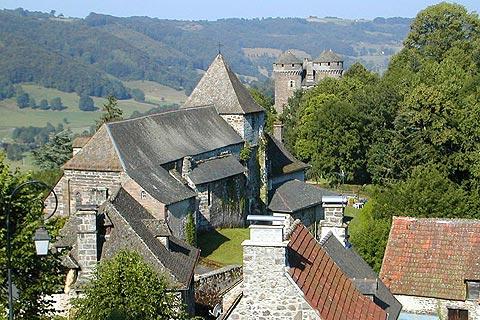 Tournemire village is situated 15 kilometres north of Aurillac, in the Massif Central (Auvergne region) of central France. The village is classed among the 'most beautiful villages of France', and is situated on a tree covered hill overlooking the valley of the River Doire and falls in the Cantal mountains at the southern edge of the Natural Park of the Auvergne volcanoes.

The history of the village is tied up with two families - the Tournemire and the Anjony, and their battles to control the village.

Parking is available on the edge of the village - the village itself is not accessible to vehicles (only residents can enter by car). The small Tournemire tourist office is here next to the car park, as well as the cemetery - overlooked by a large rock outcrop. 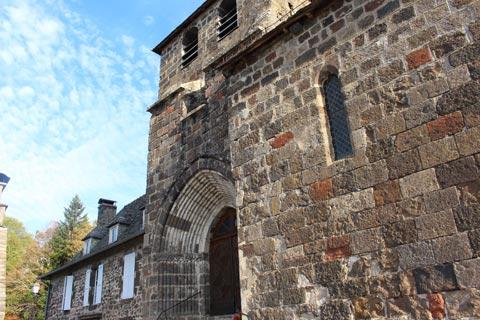 The village is small, yet perfectly formed, with many attractive small houses and is also easy to visit - the only road passes straight through the village, with a path leading off to the castle at one end. Some of the houses are said to have been built on earlier Roman foundations, and almost all are built from the local volcanic rock with slate roofs.

France This Way comment: it doesn't take long to explore Tournemire but there is a lot to admire and a visit is recommended.

You will also see the 12th century roman style church in the village centre above the castle: take a look at the stone arches around the entrance then go into the church to see the colourful wall paintings and a thorn from the crown of thorns brought here after one of the Crusades.

In the square in front of the church there is a path that leads up to some small natural caves in the cliff, and also provides a good view of the side of the church, the best place to appreciate its architecture.

The large-turretted Chateau d'Anjony that dominates the end of Tournemire is a sturdy castle with fortified walls and round towers in each corner and dates from the 15th century, with the adjacent living accommodation added in the 18th century. The castle is open to visitors from mid February to mid-November, afternoons only except July and August.

The three floors each have a large main room and small rooms in each corner (in the towers), with the fourth tower containing the staircase. Floor 2, with the Salle des Preux, is the most impressive with its walls covered in lovely colourful frescoes painted in the 16th century. As you can imagine there are also great views from the top of the tower.

You can also visit a small exhibition of 'automata' - toys and games from the pre-electronic era! 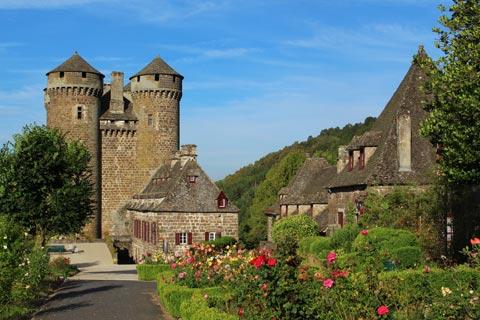 Throughout Tournemire there are lovely viewpoints across the steep valley below, while further up the hill above the top of the village there is a calvary, with a statue of the crucifixion, views across the village itself and a nice place for a picnic.

There is a great deal of attractive scenery around Tournemire - try and visit the Gorges de la Maronne - and the road across the Col du Legal to the east of the village is a good way to enjoy the lovely scenery of the Monts du Cantal.

Several of the other nearby villages are also worth a visit: we suggest you follow the route north of here that passes through Fontanges and Saint-Chamant. The village of Salers, also in the Cantal region to the north of here, is another very good example of the traditional local architecture as well as being one of our favourite villages in France!

Map of Tournemire and places nearby

Visit near Tournemire with France This Way reviews

Plan your visit to Tournemire, Cantal

The French version of this page is at Tournemire (Francais)