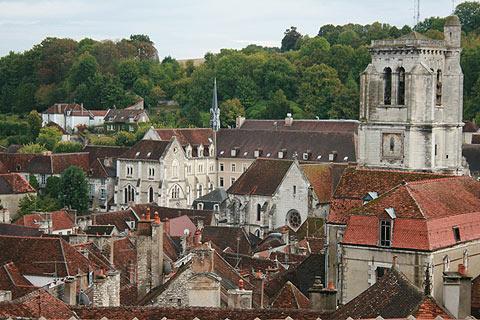 Tonnerre is a town to the east of Auxerre., in the Burgundy region. It is a pleasant town with a couple of main highlights that are well worth seeing.

France This Way comment: I got the impression that Tonnerre does not do as much as it could to highlight the places of interest: parking was difficult, parts of the town are less well maintained, and the Tonnerre Tourist Office chooses to not put leaflets out on display for browsing - rather you have to go to the counter and request the one you want. Notwithstanding these challenges a visit is recommended! 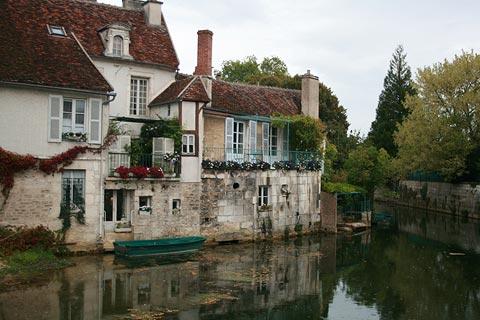 The two most important monuments in Tonnerre are the medieval hospital and the fosse dionne:

The medieval hospital complex (the Hotel-Dieu) was constructed at the end of the 13th century and at that time was one of the largest hospitals in France. Indeed the main building is very substantial even by today's standards: the main hall is 90 metres long by 20 metres wide!

There is also a grand 19th century addition adjacent to the main building, and the Tonnerre Tourist Office is in the entrance to the Hotel-Dieu.

The Fosse Dionne is a natural water source producing 200 litres of water per second. The source was developed as a circular lavoir in the first half of the 18th century and has a deep pool of a green-blue colour you would expect to find in a Yellowstone pool, not a Burgundy town centre!

Small yet perfectly formed, it is a little hidden away but a visit is obligatory while in Tonnerre. It is a very beautiful structure and really quite unmissable - ironically its beauty is perhaps increased by the less than lovely side streets that approach it.

Above the Fosse Dionne there is a track that runs up the hill to the church that stands above, and from where there are views across the town and surrounding countryside. The track follows part of a path that dates back 2000 years when the Romans had a settlement on the rock above the fosse, and used it as a water source. 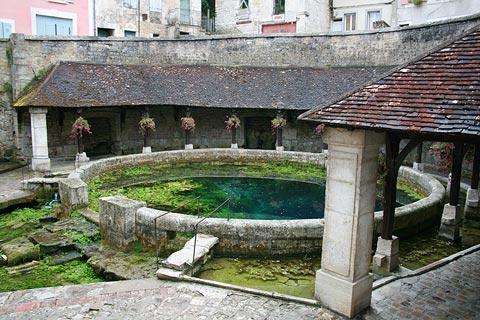 Other sites in Tonnerre

In the centre of Tonnerre you can see the imposing Church of Saint-Pierre, mostly dating from around the 16th century and with a baroque facade. The church is not open to the public very often, only the afternoons of the first wednesday of each month, so we couldn't go inside. The church is on a raised hill so there are views across the roofs of Tonnerre from the church.

The town is associated with the Chevalier d'Eon, a curious character who acted as spy for the King Louis XV, a soldier, and a teacher to the Russian nobility, and was a colourful personage who passed much of his life mixing in noble circles and passing himself off as a lady. His birthplace and his later home in Tonnerre can both be seen.

Tonnerre is on the river Armançon and there are attractive views of the houses along the riverside.

Markets are held in Tonnerre on Tuesday, Wednesday and Saturday mornings, the latter being held in the main market hall on Rue Francois Mitterrand.

There are two interesting castles within easy reach of Tonnerre: Tanlay Castle and Ancy-le-Franc Castle.

You can also go wine-tasting in the famous vineyards at Chablis and explore the historic centre of the pretty village of Noyers-sur-Serein.

Map of Tonnerre and places nearby

Visit near Tonnerre with France This Way reviews

Plan your visit to Tonnerre, Yonne

Regular market(s) are held in Tonnerre each Saturday. (Markets are held in the morning unless stated.)

The French version of this page is at Tonnerre (Francais)