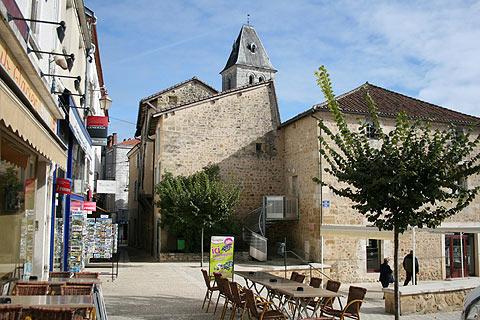 Thiviers is an active town in the northern Dordogne that is situated between the deeply valleyed landscape and Regional natural Parc of Perigord-Limousin to the north of Thiviers, and the more gently rolling countryside found to the south. It is a good base for exploring this northern part of the Dordogne region.

It is the old part of Thiviers near the church that is most interesting for visitors, with some interesting remnants from its medieval past to be seen

The Church itself dates from the 12th century but has been renovated and altered over the centuries. Don't miss the devilish carvings on the columns inside the church. 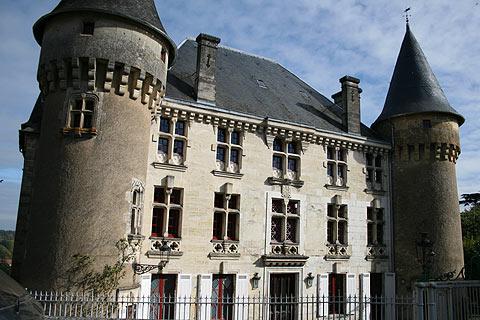 To the south-east of the church you can see the renaissance style facade of the 16th century Chateau de Vaucocourt, built on the site of a 11th century castle that was destroyed in the Wars of Religion (the castle is not open to the public).

Near to the Chateau de Vaucocourt is the 15th century Chateau de la Bastardie. The house currently belongs to a former lemonade-maker from Thiviers and it is possible to make an appointment to see the copper system that was used to make the lemonade.

On the Place du Marché aux Truffes you can see Hautefort House which was once a leper-hospital and belonged to the order of Saint Lazare of Jerusalem. Cross over the Rue Jean Jaures and you come to the Place Jean Paul Sartre. Sartre lived in Thiviers as a child and his former house is the house with white shutters on the far side of the square.

On the othere side of the tourist office are a few narrow streets with some interesting old half-timber houses. On Rue Rochefort is a house from the 14th century and this is the oldest house in Thiviers.

Thiviers has all facilities and is a pleasant centre for a stroll. Saturday morning is market day in Thiviers and that is the best time to see a wide selection of the local produce and specialities. Between mid November and mid March there are also the  foie-gras and the truffle markets for which Thiviers is renowned. 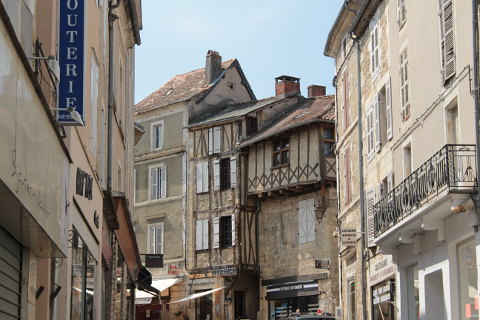 Thiviers prides itself on its local speciality, foie gras, and the other regional produce such as walnuts and truffles. Indeed the town has designated itself  'Capital of the foie gras in Green Perigord' and to learn more about foie-gras you can visit the museum in Thiviers that is dedicated to its production. The museum is in the Maison du Foie Gras in the same building as the tourist office.

The museum is full of interesting facts about foie gras and its history and indeed we learn that ducks and geese were known to prehistoric man and the practice of force-feeding (gavage) of the geese was carried out in ancient Egypt!

The region around Thiviers contains attractive countryside, and there are many marked walks to follow, also horse-riding at Lempzours and canoeing at Corgnac sur l'Isle are popular activities. There is a long path - cycle route towards St Pardoux-la-Riviere that leaves from Thiviers, and the lake at Nantheuil is popular with sunbathers and swimmers (also for fishing).

While at Thiviers don't miss the nearby village of St-Jean-de-Cole. Found seven kilometres to the west of the town it is an attractive village with a stone bridge over the river, and a well preserved old centre with a covered market and a church. Also recommended for a vist is the Chateau de Jumilhac, 20 kilometres north-east of Thiviers.

Map of Thiviers and places nearby

Visit near Thiviers with France This Way reviews

Plan your visit to Thiviers, Dordogne

A seasonal market is held in Thiviers on Tuesday.

Regular market(s) are held in Thiviers each Saturday. (Markets are held in the morning unless stated.)

The French version of this page is at Thiviers (Francais)