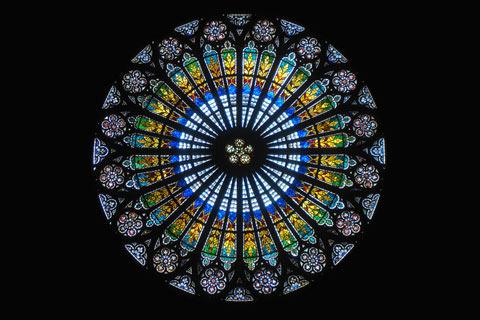 This article is about the French cathedral of Strasbourg. For the main guide to the city please see Strasbourg guide.

Legend tells that the Cathedral of Notre Dame in Strasbourg stands where once there was a dolmen and a sacred wood dedicated to the Celtic god “Esus”, a god of war, which in Roman times was replaced by a temple dedicated to Mars.

As early as 510 AD Clovis raised a Christian church in the same place, and above it was later built the cathedral, which was adorned by many kings.

This early cathedral was badly damaged by a fire in the late ninth century (873). The work of reconstruction, after a second destruction in 1007, began in 1025.

Bishop Conrad de Lichtemberg entrusted the job to Erwin de Steimbach, and the primitive Romanesque appearance of the earlier cathedral was replaced by a structure in Gothic style in 1028. The work was continued by his son John, who built the central rosette. The Cathedral was completed in 1439 by John Hürtz. During the wars of religion it passed to the Protestant faith, but it was returned to the Catholic rite in 1681.

It was again severely damaged by bombs during the War of 1870.

The beautiful façade of the cathedral is in the Gothic style, decorated with an impressive array of low-relieves angels, saints, and floral motives. The three doors are also finely worked in low relief too. On four protruding pillars are the equestrian statues of Clovis, Dagobert (603 c.-639), Rudolph of Austria (1218-1291) and Louis XIV (1638-1715).

To the north of the facade rises the imposing tower with its soaring spire.

The cathedral interior has a Latin cross form with three aisles, supported by columns of enormous proportions. The length of the cathedral is about 100 metres, with the main aisle of 38 metres.

The very beautiful stained glass windows date from the fourteenth century and is mostly a work by John Kircheim. Among the paintings, those worthy of mention are the “Assumption of the Virgin” and “Ascension of Christ”, by Joseph Heim (1787-1865).

Also extraordinary is the pulpit, with its famous clock (1487) by Hammerer a masterpiece of mechanics: the Twelve Apostles emerge every day and pass in the presence of the Redeemer. The 16th century mechanics were designed by Corrado Dasipodio and executed by the brothers Isaac and Joshua Habrecht from Schaffhausen.

Map of Strasbourg cathedral and places nearby

Visit near Strasbourg cathedral with France This Way reviews

The French version of this page is at Strasbourg cathedral (Francais)