The village of Saint-Jean-de-Cole is listed among the most beautiful villages of France, is north-east of Brantome and seven kilometres east of Thiviers in the north-east corner of the Dordogne department. It is an attractive  - a very attractive - village sat on the banks of the Cole river.

France This Way comment: the village of Saint-Jean-de-Cole is quite small but boasts a castle, a large church, a priory, an unusual shaped stone bridge over a lovely stretch of river, lots of colombage (half-timbered houses) and it once won the prize for ‘finest roofs in France’. 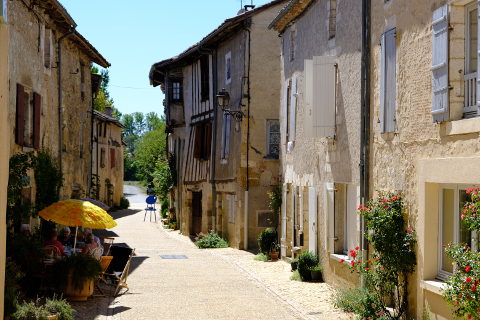 You can start your visit in the main square in Saint-Jean-de-Cole, where the most important historic monuments are situated, and you will also want to explore the narrow paved streets around the square which contain less important, but equally beautiful, old houses.

Many of the houses in Saint-Jean-de-Cole are picture-postcard pretty, with many having the traditional tiled rooves of the region - the village has been said to have the most perfect roofs in France. As well as the quaint stone cottages you will also notice some very attractive colombage houses lining the streets in the village and dating from medieval times.

The castle, called the Chateau de la Marthonie, is a functional but attractive castle and sits on one side of the main square. The castle dates from the 12th century but what you see now dates from a 15th century reconstruction, with a wing added in the 17th century. The castle once belonged to the Marthonie family who later went on to build the more lavish Chateau de Puyguilhem in Villars.

The church of Saint-Jean-de-Cole, built in the 12th century and of a unique design in Perigord, is on another side making the square very striking. Next to the church the original market hall, in wood with a tiled roof, can still be seen.

Wander along from the square passed the lovely stone houses and you reach the river and its hump-backed bridge. The bridge over the river is a lovely arched, stone bridge dating from the Middle Ages and has a nice view back to the village. The views in both directions along this verdant stretch of the river Cole are also very pretty and there are some pretty houses along the river's edge.

One important building next to the bridge is the 15th century priory, which still retains part of it original cloisters.

There are a couple of cafes in Saint Jean de Cole where you can get a coffee or lunch and enjoy the peaceful atmosphere of the village.

Every year during the weekend closest to the 8th of May Saint-Jean-de-Cole has a flower fair (Les Floralies) where more than a hundred exhibitors exhibit and sell plants and garden products. It is a very colourful event and a great time to visit the village. 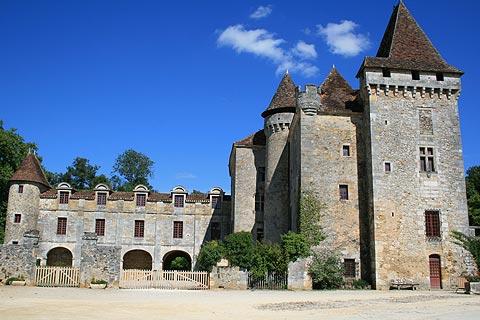 Map of Saint-Jean-de-Cole and places nearby

Visit near Saint-Jean-de-Cole with France This Way reviews

Plan your visit to Saint-Jean-de-Cole, Dordogne