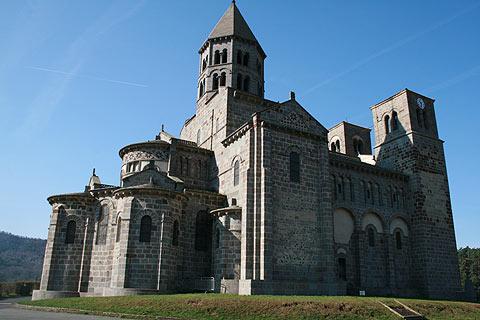 Saint-Nectaire is located north-west of Issoire and south of Clermont-Ferrand in the Couze Chambon valley, which falls in the Puy-de-Dome department of the Auvergne (in the eastern part of the Parc des Volcans).

In a situation occupied since prehistoric times (as evidenced by the substantial dolmen here) each epoque has left its mark on the town and there are several reasons why people visit Saint-Nectaire. Saint-Nectaire town centre is pleasant, with a couple of bars and small shops, but it is the church that is the main attraction. 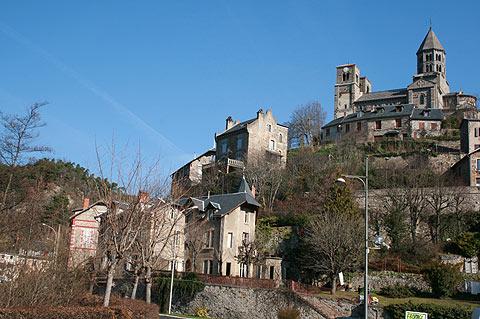 Roman architecture - the church and town

Standing on the hill (Mont Cornadore) above St-Nectaire-le-Haut the beautiful 12th century church is a lovely example of roman architecture in the region.

Perfectly proportioned outside and beautifully decorated within, and one of the most interesting churches in the Auvergne, the church features a facade with two towers and then an additional tower which is octagonal and more decorative (this was rebuilt in the 19th century based on the church at Saint-Saturnin, so may not represent the actual original appearance of the church).

The chevet at the rear of the church is also intricately decorated.

Inside the church there are numerous artefacts of interest, including the so-called 'treasure of the church of Saint-Nectaire' and more than 100 intricately carved capital stones - very unusually, on some of these you can still see the original paintwork.

The spa town and region along the river valley is called Saint-Nectaire-le-Bas. Although the town was established as a thermal spa as far back as roman times (you can visit the original spa at the Grottes de Cornadore in the upper town) it was developed as a health destination in the 19th century.

The spa town has a series of grand villas running alongside the river up the valley, and also a casino.

The modern spa complex in Saint-Nectaire is called Thermadore and offers a wide range of options, with a heated pool, spas, jacuzzis and aqua gym, and various other therapies. If you are looking for a relaxing break see Thermadore for details of treatments and prices. 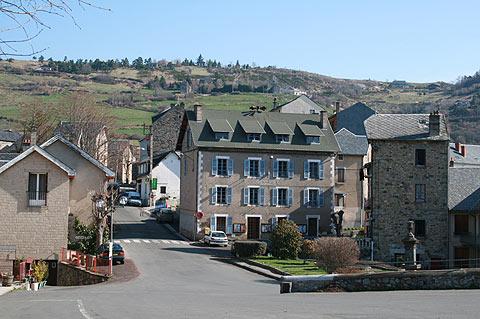 The highly regarded Saint-Nectaire is a 'firm soft cheese' is produced in the farms and hamlets around the village itself. The cheese has ancient origins and is now protected as an AOP (Appellation d'Origine Protogée) product - broadly comparable with AOC wines, this means that cheese can only be called Saint-Nectaire if it made in a specified local region and using traditional techniques.

There is a small museum in the town that explains the history and production of the cheese.

Activities in the region

The town is well placed for outdoor activities, and there are numerous walks in the region, including the climb up the nearby Puy de Mazeyres for good views across the surrounding region. The small waterfall at Saillant on the edge of Saint-Nectaire is a picturesque place for a picnic.

The town is also a base for skiing in the Auvergne mountains during the winter.

Map of Saint-Nectaire and places nearby

Visit near Saint-Nectaire with France This Way reviews

A seasonal market is held in Saint-Nectaire on Sunday. (Markets are held in the morning unless stated.)

The French version of this page is at Saint-Nectaire (Francais)