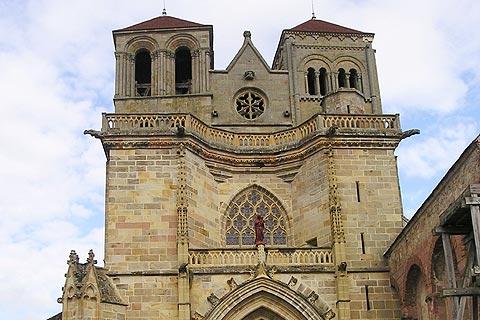 The town of Souvigny is located in the Allier department of the Auvergne, west of Moulins and north of Vichy.

A quiet town set among the wooded hills of the Auvergne, Souvigny is a little off the usual tourist trail but has a particular attraction that will interest visitors to the region...

Priory Church of Saint-Peter and Saint-Paul

The Priory Church of Saint-Peter and Saint-Paul is a roman style church dating from the 11th and 15th centuries and built due to the importance of the town as a pilgrimage centre, and because it was an important centre for the Dukes of Burgundy who at that stage ruled much of the region. 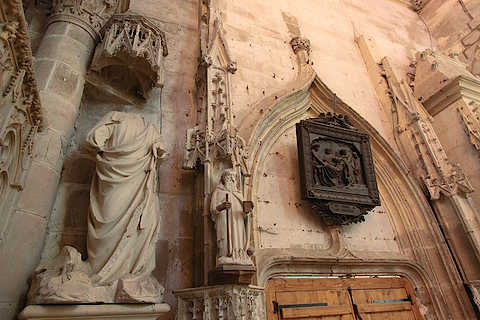 The church is very interesting with several features that will attract your attention, including the main facade with its two towers, the decorative roof ornamentation, and the cloisters. From the front, if you look at the facade you can see that the top half with the towers is in the Roman style, and the newer facade built in front of the original church is in the gothic style.

Inside, the church also has some fine stone carvings, particularly the capitals (the stones at the top of the columns) and the tombs, and an 18th century organ, which is itself a listed historic monument as well as some medieval frescoes in the sacristy and a 'mise au tombeau' carving.

It is also the church where some of the tombs of the most influential Dukes of Burgundy can be seen including Louis II and his wife Anne d'Auvergne (died 1410 and 1416 respectively).

The building to the right of the church is also charming, a neo-classical building in red brick that was part of the convent. The garden next to the church is attractive, with lots of French style box hedges.

After visiting the church you can visit the museum next to the church, which contains some interesting artefacts from the town's past. Of particular interest in the museum is a tall stone column that depicts the signs of the zodiac, animals and monsters, and typical work activities called the 'calendrier de Souvigny' - be sure to allow time for a good look, the column is a remarkably detailed and fascinating item of medieval art.

The centre of Souvigny in front of the church and along Rue de la Republique is also pleasant to explore: small but with stone houses traditional of the region. The Church of Saint-Mark was built in the 12th century.

The town is now recognised as a 'Grand Site of the Auvergne' and has made investments and efforts to make the most of the important architectural heritage it contains: a place to discover before tourism takes over! 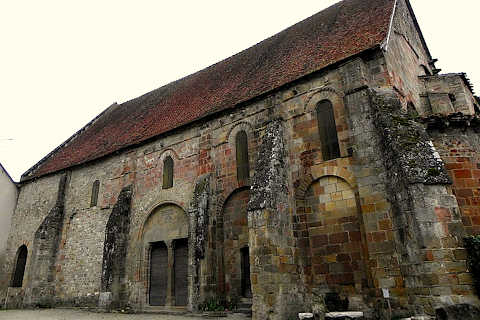 The surrounding region will also be of interest to church enthusiasts: there are several villages close to Souvigny with interesting examples of roman style churches, typically dating from the 11th to 13th centuries.

Map of Souvigny and places nearby

Visit near Souvigny with France This Way reviews

Plan your visit to Souvigny, Allier

The French version of this page is at Souvigny (Francais)