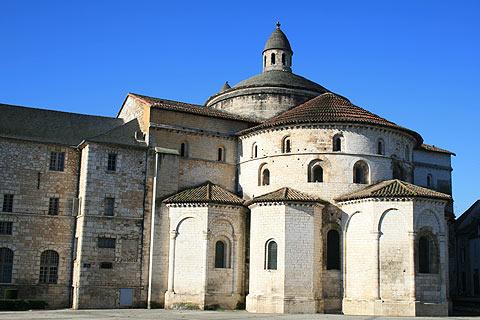 Souillac is on the north-western edge of the Lot department, just across from the Dordogne department and in the Dordogne River valley. Although many people zoom past Souillac on their way to the Dordogne further west, as a minimum you should stop and see the major feature of interest in the town:

France This Way comment: due to its position, with Sarlat and the Dordogne to the west and Rocamadour and the Lot Valley to the east, Souillac is a bustling and lively town during the summer. 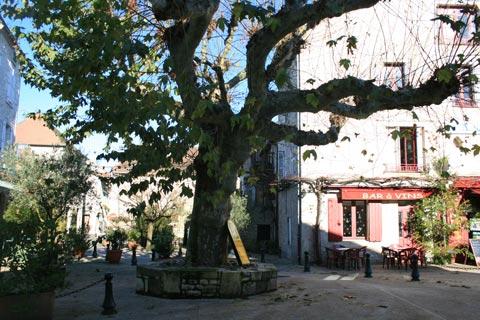 This highlight of a visit to Souillac is the Abbatiale-Sainte-Marie, a 12th century abbey church and a fine example of Roman style architecture. There was a monastery here from the 10th century, and by the 12th century it had become an important local centre and the impressive church was constructed. Much of the church was destroyed during the 16th century, firstly during the Wars of Religion and again later by a fire, but the part that remains is still very impressive.

Apart from the balanced design of the building there are also some impressive carvings, above all around the entrance door and the statue of Isaiah, which is one of the great carvings of the Middle Ages. Other carvings represent the story of the monk Theophilus. (It is likely these carvings were produced by the same sculptors as the impressive doorway to the Abbey of Saint Peter in Moissac.)

Souillac grew around the church, and is now a sizeable town. Although rather surrounded by more recent development, there are several interesting buildings from the earlier period of the town to be discovered as you explore. There are several medieval buildings in the Rue de la Halle and in Place Doussot you can see the 19th century market hall.

One of the most noteworthy monuments is the Church of Saint-Martin, which has an imposing belfry now also used as a clocktower. By the 19th century the church was in use as the Town Hall and now contains the Souillac Office of Tourism.

Enthusiasts of contemporary architecture will be interested to know that the Pont Louis Vicat across the Dordogne river in Souillac was the first bridge in the world to be built with cement, in 1812! After looking at the bridge you can enjoy a pleasant walk along the riverside.

You (or rather, your children) might like to visit the Museum of Automatons in Souillac, which features automated toys produced between 1860 and 1960, carefully maintained and in working order, and attractively presented. 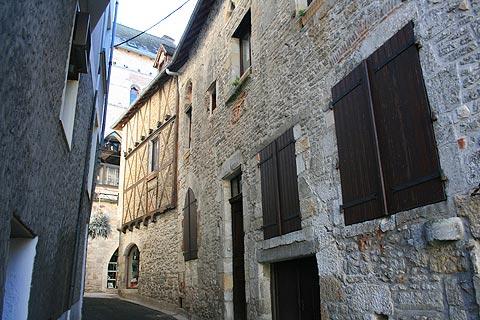 Souillac is very well placed to explore many places of interest in the region, with Domme and the Dordogne to the west, Cahors and the Lot Valley to the south, the cluster of beautiful villages around Collonges-la-Rouge to the north-east and Rocamadour to the south-east.

Map of Souillac and places nearby

Visit near Souillac with France This Way reviews

Plan your visit to Souillac, Lot

Regular market(s) are held in Souillac each Friday. (Markets are held in the morning unless stated.)

The French version of this page is at Souillac (Francais)