Sorges is a small village in the Dordogne to the north-east of Perigueux. Although small Sorges is known as a truffle capital and has an interesting ecomuseum with lots of information about the history and culture of truffles in the area. Sorges also has a very attractive church built in a mix of Roman and Gothic-Renaissance styles.

France This Way comment: the attractive church and interesting ecomuseum make Sorges worth a visit if you are in the area.

The centre of Sorges is a pleasant village centre with its church and a fountain and a scattering of shops and tea-shops. On the edge of town is an auberge which specialises in truffles giving you a chance to sample the excellent truffles for which Sorges is renowned. 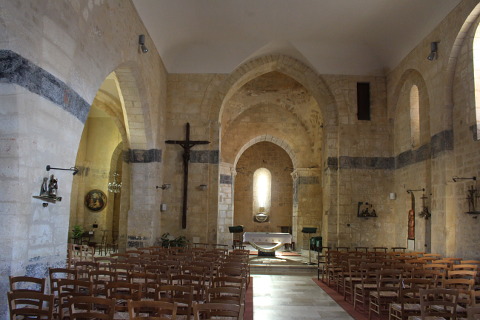 At the heart of the village is the charming church of Saint Germain which is an interesting mix of styles. On the right-hand side it has a Roman doorway and on the left the doorway is in traditional Renaissance style. Inside the Roman section is beautifully decorated with a cupola and medieval carvings of animals and people.

The interior of the church has clearly been fairly recently restored and as well as the original decorations including some lovely frescoes there is a series of 'Stations of the Cross' that have been made by Richard Riche, an artist of the parsih, and are striking representations made of painted brass.

There are a couple of tea shops in the centre of the village where you can stop for a break and there are a number of marked walks which lead out from the village if you are looking to do some walking in the area. One of these is a truffle walk that you can do yourself or as a guided walk (see below).

The deliberate culture of truffles began at Sorges: in the 19th and early 20th century in the Sorges area the deliberate planting of acorns from truffle producing oak trees in suitable chalky soils resulted in a big increase in the production of truffles and 'trufficulture' became an important industry in the area.

Sorges continues to have one of the main truffle markets in the area though competition from Chines truffles is now fierce in the truffle economy. To celebrate its truffle traditions a 19th century farm building on the edge of Sorges has been converted into an ecomuseum.

The Sorges Ecomusée is filled with information about everything to do with the growth and harvest of the truffle, known locally as the black diamond. The museum has some interesting displays and if you wish in the summer you can meet here at 15.30 for a guided walk around some truffle woods in the area. 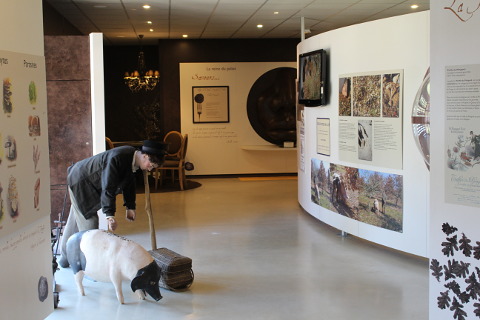 A truffle is the fruiting body of an underground fungus and gives a strong 'mushroom-like' flavour to food. It is considered a great delicacy and is expensive to buy. Truffles are known to have been appreciated for centuries and the Babylonians, Ancient Greek and Romans all enjoyed truffles.

In the Middle Ages truffles were thought to be the work of the devil and their consumption was banned by the clergy. During the Renaissance the Italian royalty rediscovered the truffle and were particularly keen on the Piémont truffle. In France Francois I and Catherine de Medicis caught on to truffle eating and favoured the summer truffles of Perigord and Bourgogne.

Doctors began to accord various medical properties to the truffle including that of being an aphrodisiac. However in 1566 a Spanish doctor warned against their consumption leading the Spanish to stop eating them.

On the edge of the village the Auberge de la Truffe has an excellent menu with various truffle specialities and is well worth a visit.

Where to visit nearby

On the edge of Sorges is a garden, 'Le Bouquet',  with fifty different patterns and parterres created using box hedging and various other plants. It is an unusual garden worth a visit.

Staying with the gourmet theme the neighbouring town of Thiviers is a centre of Foie Gras production and has a small museum dedicated to the history and production of foie gras.

Map of Sorges and places nearby

Visit near Sorges with France This Way reviews

Plan your visit to Sorges, Dordogne

The French version of this page is at Sorges (Francais)