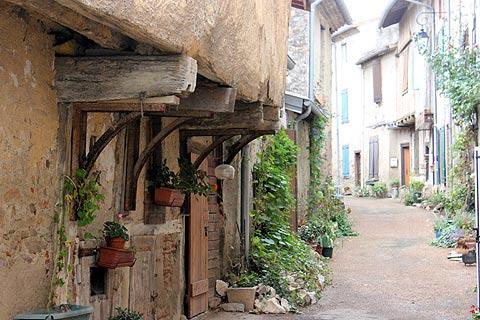 The small town of Sorèze is in the south of the Tarn department (Midi-Pyrenees region) to the north of Castelnaudary. As well as the town you can also visit the Abbey-School of Soreze.

It was almost by accident that we discovered the small town of Sorèze in the south of the Tarn department when we were exploring some of the better known tourist destinations in the region - and we were very glad we did because it is an interesting medieval town with a great deal of historical monuments and buildings.

The town itself contains a large number of ancient houses, many of them in colombage (half-timbered) and numerous of the 'encorbellement' style*. many of the houses in Sorèze also feature 'information boards' highlighting the notable people who once lived in them - in truth I didn't recognise many of the personalities but it helped bring a sense of history to the visit! 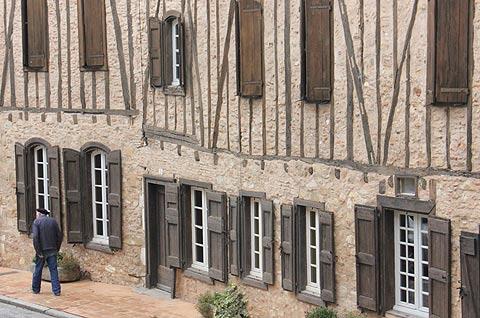 *Maisons à encorbellement: a style of house with the upper stories protruding over the lower stories, and found widely in medieval houses across France. Explanations for this design vary widely in the literature: reducing ground level surface area to reduce taxes, protecting lower levels from rain, and enabling waste thrown from the upper stories to land some distance from the houses are the most common. In truth it is probably a combination of all three that explains the popular design.

Some of the houses here also have arcades, a protected area at ground level where market traders could carry out their business. The houses in Place dom Devic in Soreze contain the best examples.

As you explore you will also come across the substantial belltower of the Church of Saint-Martin. This is all that remains of the 15th century Church of Saint Stephen, the rest of the church having been destroyed during the Wars of Religion in 1573.

The most important individual monument in Soreze is the abbey-école on Rue saint-Martin. With a history dating back to 754 and the founding of a benedictine abbey here, the ensemble has known a variety of uses, most notably as an important centre for education, as a Royal Military School (from 1776), then later a college well known in France for the military leaders, philosophers and politicians that attended the school. It was only in 1991 that this role ended.

A visit to the abbey-school focusses on retelling this history as you follow the grand hallways, rooms and dormitories of the building. There are also extensive garden and park areas, maintained in very good condition and covering 6 hectares (14 acres), that incorporate various water features.

The 17th century abbey church that once formed part of the complex was converted into stables in the 19th century, and more recently into an auditorium. 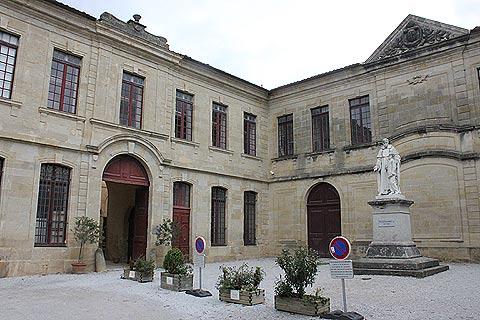 The abbey is now used for many functions, both private and public, of which the highlight is the annual 'musique des Lumieres' festival each summer (usually over several days in the second week of July), which includes lightshows, opera performances and classical concerts based in the abbey grounds.

The countryside to the east of Sorèze includes lakes, caves and waterfalls and is the Dominial Forest of the Montagne Noire. The most interesting villages nearby include Revel, Saissac, Montolieu (well known for its bookshops) and Durfort.

A little further afield, the town of Castelnaudary is well known for its cassoulet, and Carcassonne to the south-east is about 50 kilometres from Soréze but is one of the most impressive medieval towns in the world and well worth visiting.

Map of Soreze and places nearby

Visit near Soreze with France This Way reviews

Plan your visit to Soreze, Tarn

The French version of this page is at Soreze (Francais)