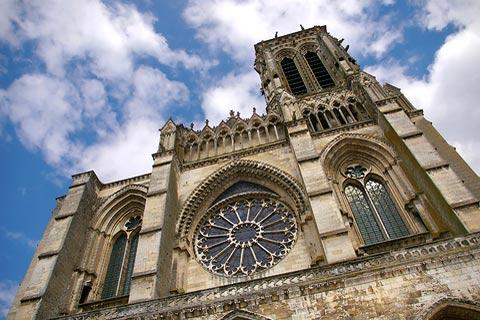 Soissons is a town in the western part of the Aisne department of Picardy, to the south-west of Laon. It is a town with a very ancient history dating back before the Ancient Romans, when it was the main settlement for the Suessione people (one of the Gaul tribes in the centuries before the Romans conquered the region).

The town has two important monuments: the Cathedral of Saint-Gervais and Saint-Protais, and the Abbey of Saint-Jean-des-Vignes, as well as various other monuments of buildings of interest, which have contributed to the town being classified as a 'town of art and history'. 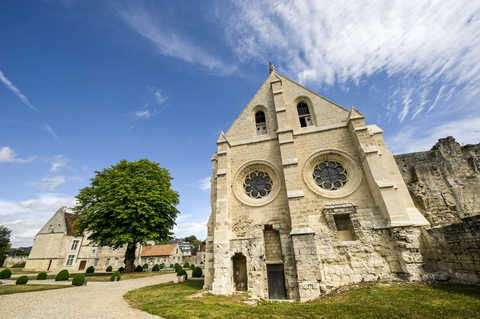 Dating from the 11th-13th centuries, the roman style abbey is the most important monument in Soissons. It also includes modifications made in the 16th century. Although the main abbey church was destroyed after the revolution, you can still see the decorative carved stonework of the facade with the two tall spires still in place on either side, and a part of the the cloisters.

Associated buildings such as the storehouses and the living accommodation can also be seen.

Cathedral of Saint-Gervais and Saint-Protais

Built between the 12th and 14th centuries, the cathedral in Soissons is in the gothic style. It is unusual in appearance, having an unsymmetrical facade (there is a tower on the right but not on the left side of the front). The cathedral contains some notable artworks such as the 'Adoration des begers' by Rubens and stained glass windows by Raphael Lardeur.

Other sites of interest in Soissons

Other historic sites in Soissons include the Abbey of Saint-Leger, mostly a 16th century reconstruction although the chevet is part of the original 12th century church. The abbey now contains the Town Museum, and has an impressive cloister.

You can also see the crypt of the ancient Abbey of Saint-Menard, several other notable churches, and the classical style town hall of Soissons, built in the late 18th century. The Hotel de Barral is another grand 18th century townhouse. Another religious monument is the  'Square Saint-Pierre' - although not a lot remains of the original grand complex, it was interestingly at one time among the most important female monasteries in France.

Elsewhere in Soissons you will discover several large open squares and parcs to explore and some picturesque riverside walks, making it a pleasant town to explore. 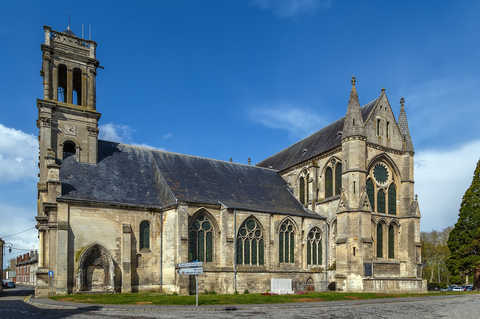 The extensive buildings and ruins of another 12th century abbey can be visited near Soissons at Longpont Abbey. We also recommend a visit to the castle at Chateau de Montgobert, a large 18th century castle built in the classical style in the 18th century and surrounded by extensive parklands.

Map of Soissons and places nearby

Visit near Soissons with France This Way reviews

Soissons is classified as a listed town of Art and History

Plan your visit to Soissons, Aisne

Regular market(s) are held in Soissons each Wednesday & Saturday. (Markets are held in the morning unless stated.)

The French version of this page is at Soissons (Francais)