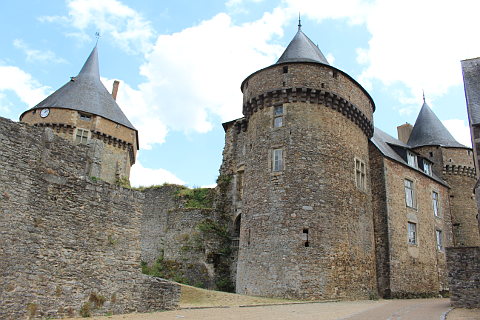 The town of Sillé-le-Guillaume is located near the very popular Sillé lake to the west of Le Mans and south of Alençon, and is classed as a small town of character. It has an ancient historic centre and a newer market town which grew up from the 12th century onwards.

Sillé le Guillame is named after and developed largely because of two important personnages. The first was the gallo-romain Sillus who built a residence on the ancient Le Mans to Jublains road, then later in the 11th century Guillaume, the baron of Sillé, was told by the count of Maine to defend the territory and he built the castle.

The castle endured many battles and suffered severely in the Hundred Year War.  It was rebuilt in the 15th century with a large defensive tower though this was never used defensively. In the 16th and 17th century residential wings were added giving it a more peaceful facade. The castle is now owned by the town and serves for various functions. It can be visited in July and August. 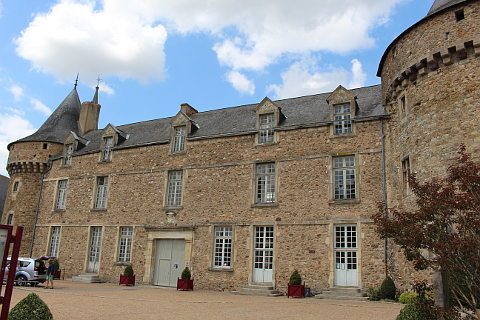 In the 13th century a collegial church was built in Sillé-le-Guillaume near to the castle. The town then became separated into two distinct halves with the church and castle in one half and the emerging merchant and artisanal town on the other part. The chateau and church are in the higher part of the town overlooking the merchant town below.

Weavers, blacksmiths and innkeepers prospered and the town continued to grow. By the 18th century the town produced muslim, hemp and linen and its prosperity continued.

Today many visits to the area are to the popular leisure lake of Sillé. Sillé Lake is four kilometers from Sillé-le-Guillaume town centre and is in a woodland setting covering 32 hectares. It is popular for camping and a wide range of watersports as well as horseriding and cycling in the woods. Its beach known as Coco Plage is watched by life guards in July and August.

Sillé lake is a classified natural site due to the quality of its scenery and to the lake itself as these are quite rare in the area. 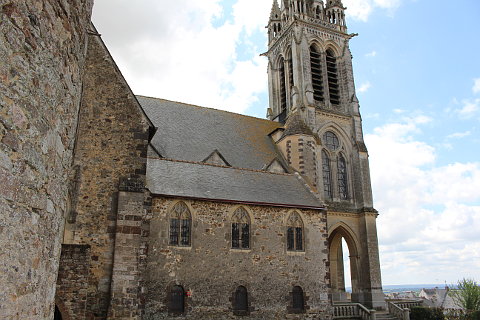 Just 20 kilometers away from here you can visit the Chateau de Sourches, a splendid neo-classical chateau surrounded by a park designed by Mansart.

One of our favourite towns in the area is Fresnay sur Sarthe which has the ruins of a castle in the centre of town that overlooks a pretty stretch of the Sarthe river lined with pretty houses and ancient wash houses. Also near Sillé-le-Guillaume, the village of Sainte-Suzanne is one of the "most beautiful villages of France" and also contains the ruins of a chateau.

The Jardins de la Mansoniere is a pretty garden set in the village of Saint-Ceneri-le-Gerei which is another of the most beautiful villages of France and is one of the highlights of the area.

You can find more travel ideas in the Sarthe guide and the Pays-de-la-Loire guide.

Map of Sillé-le-Guillaume and places nearby

Visit near Sillé-le-Guillaume with France This Way reviews

Plan your visit to Sillé-le-Guillaume, Sarthe

Regular market(s) are held in Sillé-le-Guillaume each Wednesday. (Markets are held in the morning unless stated.)