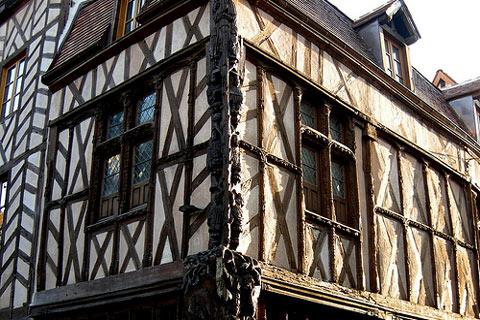 Sens is an important local town on the Yonne River, north of Auxerre in the Yonne department of the Burgundy region.

As well as having several interesting historical monuments - above all the cathedral - Sens is also an important local shopping town and local regional centre for the Yonne department.

The main reason visitors come to Sens is to see the gothic Cathedral Saint-Etienne that dominates the town. The cathedral is especially important because it was the first gothic cathedral built in France and acted as a role model for many other gothic style cathedrals built later both in France and elsewhere in Europe. 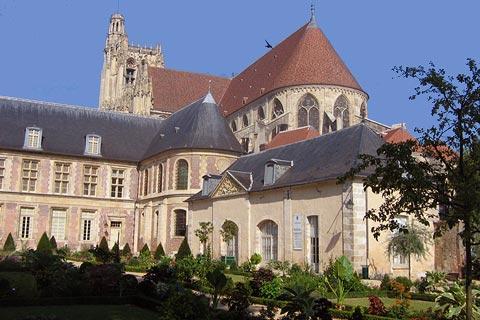 Built in the 12th century from 1130 onwards, the cathedral replaced an earlier roman style cathedral on the same site. The new architecture was intended to bring a new sense of light into churches, principally by using side-supports along the length of the church on the outside (called flying buttresses), which reduced the structural importance of the walls themselves, and enabled windows to be added along the sides.

On the outside it is the facade with the entranceway and large rose window that is the main highlight, and the numerous statues and carved stonework that have been incorporated in the design. The transepts, added in the 16th century are in the later 'flamboyant gothic' style and also have impressive entrances. Inside, it is the 13th century stained glass windows that are the main attraction, and the 18th century organ.

Louis IX was married in the cathedral in 1234, and Thomas Becket also sought refuge here.

Other highlights in Sens

If you are interested in church relics and ornaments, be sure to visit the museum in the Bishop's Palais next to the cathedral which has a very good collection of medieval religious art. The dungeons in the palace are especially interesting, with walls covered in graffiti by prisoners in the medieval period.

Take a look at the market hall across from the cathedral (market day in Sens is Monday, Friday and Saturday) then explore the lovely streets in the town, with expensive boutiques set in medieval colombage houses.

The pedestrianised Grande Rue is the centre of the old town and activity in Sens, and the place to go when you are here for shopping.

In the centre of Sens you can see the Maison Abraham, a very lovely 16th century colombage house. The ornately carved corner post is an example of an 'arbre de Jessé' (which represents the family tree of Christ starting with Jesse, father of King David). The Maison Jean-Cousin is another impressive medieval house, with a most unusual external tower and staircase. 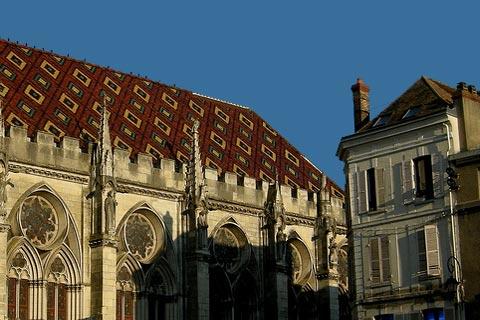 There are also various parks in Sens, and the town has been awarded 4* in the 'Towns in Bloom' awards. The most notable is the Parc du Moulin à Tan which is a large park to the south of the town centre with tropical greenhouses, and in the centre of Sens you can visit the gardens of the orangerie, next to the Bishops Palace, and the gardens in Square Jean Cousin (on Cours Chambonas).

Finally, the Yonne river banks in the town are very pleasant, and overlooked by the Saint-Maurice church.

Places to visit near Sens

Among places of interest nearby visit Villeneuve-sur-Yonne to the south of Sens and Villeneuve l'Archeveque to the east. The Natural Reserve at Saint-Clement is just a few kilometres to the north of Sens, while the Chateau at Vallery to the west also merits a detour, perhaps passing by Villebougis (3* villages in bloom) en-route.

Further afield, you can visit the historic centre of Joigny about 35 kilometres to the south-east of Sens.

Map of Sens and places nearby

Visit near Sens with France This Way reviews

Sens is classified as a village in bloom (ville fleurie) 4*

Plan your visit to Sens, Yonne

Regular market(s) are held in Sens each Wednesday & Monday all day & Friday. (Markets are held in the morning unless stated.)

The French version of this page is at Sens (Francais)