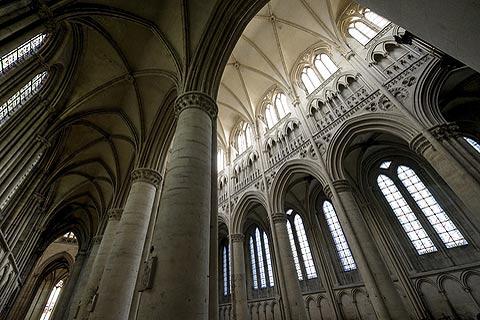 The Normandy town of Sées is about 15 kilometres north of Alencon, towards the south of the Orne department, and on the Orne river.

The location has been occupied since at least the time of the Gauls (before the Ancient Romans), and it was a fortified town in the Dark Ages. Sées was then captured by the Normans, and again by the English during the Hundred Years War, then ransacked in the 16th century during the Wars of Religion! The peace that now reigns in the town gives little indication of the turbulent passed that Sées has experienced

Sées is best known for its cathedral, which is the principal reason to visit the town, but there are a few other monuments and sights of interest to discover while you are here so a stroll around the centre is also recommended.

Much the best way to explore Sées is to get the map from the Tourist Office (near the Cathedral) that suggests a route to follow through the town and passes places you might otherwise have missed. Many of the landmarks also have informative information panels. This route also passes through gardens with a play area (towards the west of Sées) where your children will enjoy the chance to run around instead of looking at historic monuments!

Dominating the centre of Sées, the cathedral dates principally from the 13th to 15th century (with modifications and renovations in the 18th and 19th centuries, by which time the cathedral had started to fall to ruin) and is built in the gothic style, typified by the use of pointed arches and substantial flying buttresses*.

* Flying buttresses are usually used to provide additional strength to the sides of a gothic cathedral, but in Sées two substantial flying buttresses have been incorporated in the front of the facade!

On the outside it is the facade, spires and the stone doorway that are of principal interest, although many of the carvings around the doorway were unfortunately damaged during the revolution.

Inside there is one main central nave with a vaulted ceiling, and two smaller naves to the sides, separated by imposing stone columns and arches. The stained glass windows in the cathedral are notable with those in the transept particularly impressive and both in the rose form popular at that time. There is also a highly regarded 18th century organ in the cathedral.

Film enthusiasts might recognise the interior of Sées Cathedral - it was used for the King's Coronation scene in the film Joan of Arc by Luc Besson.

While most other monuments here are of limited interest it is still useful to know what to look out for when you visit and taken together they make the town pleasant to explore. Among these other places of interest in Sées are:

You can also visit the Museum of Sacred Art in the town. 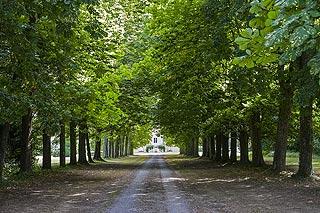 In the vicinity of Sées

To the north of Sées you can visit one of the French national horse training centres at Haras du Pin, wich has preserved its 18th century buildings and is a very popular attraction.

Most leisure activities are based in the Ecouves Forest, a substantial ancient forest of mixed woodland that offers various opportunities for exploring the countryside and contains numerous marked trails. One of our group being a garden enthusiast we also visited the castle and terraced French style gardens at the Chateau de Sassy (to the north-west of Sées near Saint-Christophe-le-Jajolet) which was also very pleasant.

Of course, a visit to this region will also include visits to towns such as Argentan to the north-west and Alencon to the south, both easy to reach from here and pleasant to explore.

Map of Sees and places nearby

Visit near Sees with France This Way reviews

Plan your visit to Sees, Orne

Regular market(s) are held in Sees each Saturday. (Markets are held in the morning unless stated.)

The French version of this page is at Sees (Francais)