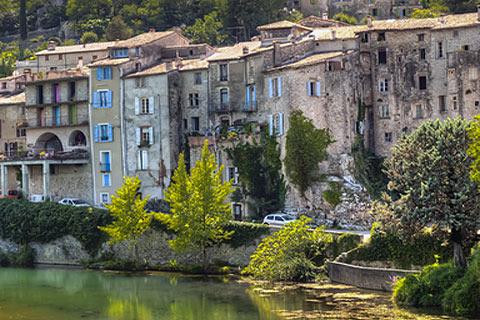 Sauve is a small town in the valley of the Vidourle river, north of Quissac and Sommieres, and about 35 kilometres west of Nimes. It falls within the Gard department of Languedoc-Roussillon, on the edge of the Cevennes region. Sauve can trace its history back more than 1000 years, and there is evidence of occupation of the region by the Gauls and Romans dating back 2500 years.

France This Way comment: the unmissable highlights of a visit are the view of the river with the old bridge and village behind and the walk through the Mer des Rochers to the Chateau de Roquevaire.

The village is centred along the banks of the river and the slopes of the hill called the Mer des Rochers. It is a pleasant place to explore, with buildings mostly dating from the 14th to the 18th centuries, and several historic monuments of interest. 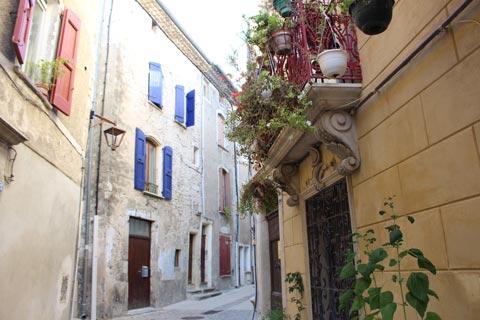 Car parking is available in the car park on Rue des Combes in the northern half of Sauve (enter the town by the new bridge and continue to the right) and in Place de la Vabre in the southern half of the town (next to the old bridge). From either of these car parks all the highlights can be reached easily.

The town follows a simple layout with two bridges, a road along the riverside between them, and various smaller streets leading up the hill to the Grand Rue which travels almost the whole length of the town, passes through the principal squares and is parallel to the river. The main entrance to the old town is through the ancient gateway at the end of the old bridge.

Start by enjoying the lovely view of the village, surrounding forest and the bridge from along the banks of the Vidourle river. The stone bridge across the river is a highlight in Sauve, dating from medieval times (the 12th to 13th centuries) and with attractive views along the river and across the village.

The principal pleasure is in simply exploring the narrow streets of Sauve, admiring the ancient houses which often feature gothic style ornamentation and taking in the atmosphere. The views across the village and river continue to improve the further up the hill that you follow the streets. The streets are are often narrow and steep, especially as you get further up the hill, and sometimes pass through vaulted passages, adding to the charm and authenticity of the medieval centre.

One of the most important houses is the Maison de l'Eveque, built in early medieval times and substantially rebuilt in the 15th century. The house is named for the bishop of Maguelone, one-time owner of the property.

Elsewhere in the village you can see the church of Sauve, and also a medieval clocktower with a wrought iron campanile typical of the Mediterranean regions of France, the Tour de Mole and the Hôtel de la Monnaie, various ruins of fortified buildings such as the 11th century tower called Le Castellas and parts of the original defensive ramparts of the town.

The Conservatoire de la Fourche in Sauve provides an interesting glimpse of an industry that was once very important, the production of wooden forks as used in stables and by the wool industry. The process is very involved, starting with the specially grown trees and followed by the elaborate process that shapes the wood as necessary. 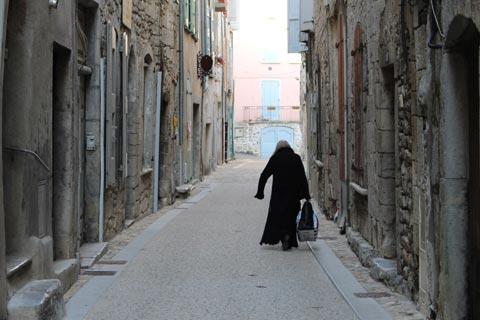 The town also now has something of a reputation for its artistic community and the quaint streets of Sauve attract a large number of artists.

If you continue up the hill beyond the village you enter the region called the Mer des Rochers ('Sea of Rocks') where abandoned and ruined buildings blend into the landscape of large natural rocks and boulders. The rocks have been carved into remarkable shapes by thousands of years of erosion and the trees and plants form an attractive backdrop. The château de Roquevaire is also on the slopes of the hill, although closed to the public except on the official 'journées du patrimoine' (heritage days) in Europe.

The Mer des Rochers is a typical landscape of the Cevennes and the causses of the region, with numerous large limestone boulders to be seen across the landscape.

There is a great deal to enjoy in the scenic countryside around Sauve and also lots of small unspoiled villages to visit: among our favourites are Vézénobres and Sommieres but you will discover your own favourites when you visit. You can also see the place where the river Vidourle emerges from its subterranean route from Saint-Hippolyte-du-Fort, a few kilometres to the west of Sauve.

If you want to visit a larger town we recommend a trip to see the Roman monuments at Nîmes, and gardeners will love exploring the lovely gardens at the Bambouseraie at Prafrance.

Map of Sauve and places nearby

Visit near Sauve with France This Way reviews

Plan your visit to Sauve, Gard

The French version of this page is at Sauve (Francais)