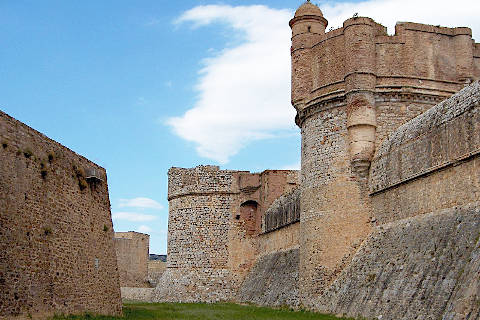 Fort de Salses is a castle located about 20 kilometres north of Perpignan (along the A9 autoroute), at the town called Salses-le-Chateau.

An impressive Catalan (Spanish) stronghold dating from the 15th century, the fort was once on the border between Catalonia and France, and was constructed on the site of an earlier castle that had been destroyed.

The fort saw its first military siege in 1504, even before it was finished, and was then sieged a further three times during the Thirty Years War, to be taken by the French in 1642. The need for a fortress ended when the Treaty of the Pyrenees was signed in 1659.

The original fort was subsequently enhanced further by Vauban, the renowned military engineer, and is now an unusual combination of medieval fortress and more recent defensive structure - this is called the transition style.

The Fort de Salses and its interior buildings and fortifications are therefore an interesting example of military architecture, with several improvements on the earlier style of medieval castle - there are numerous enhancements that enabled both the exterior of the castle and the interior parts to be better defended during an attack. Up to 1500 men lived in the castle and could survive a siege of several months duration.

The castle walls are more than 10 metres thick and built from a mix of stone and red brick to follow a simple rectangular layout with a large tower in each corner and the keep in the middle of one side. The whole structure is set into the earth a few metres lower than the surrounding landscape, the idea being to give  smaller area of wall open to attack.

The fort is surrounded by a deep moat (now empty) that was originally reached by two drawbridges, one before and one after a separate building that stands in the moat and the heart of the castle contains a large open courtyard. Originally the keep was much taller than today, but Vauban ordered that its height be signicantly reduced.

The Salses Fort has been a listed Historic National Monument for more than 100 years.

There are various buildings of interest to be seen in Perpignan just a few kilometres south of here. The most visited historic monuments in the region are the cathar castles such as Chateau Peyrepertuse and Chateau Queribus in the mountains to the west of Salses Fort.

Last but not least we also recommend you visit the Abbey of Saint Martin of Canigou on the slopes of Mount Canigou to the south-west of here.

See more castles in France. You can find more travel ideas in the Pyrenees-Orientales guide and the Languedoc-Roussillon guide.

Map of Fort de Salses and places nearby

Visit near Fort de Salses with France This Way reviews