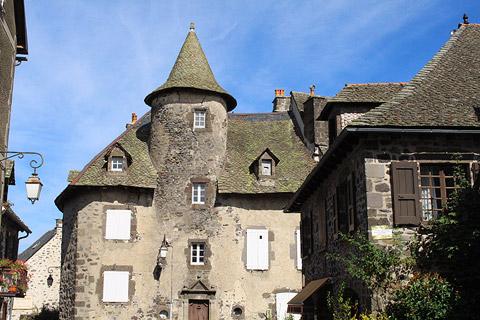 Salers, listed among the most beautiful villages of France, is 42 kilometres north of Aurillac in the Massif Central (Auvergne region) and is at the western edge of the Cantal volcanic region.

Salers has origins that can be traced back almost 1000 years ago, but it was during the boom years of the 15th century that much of the current town was constructed. Salers describes itself as 'a black diamond on a green carpet', a quite appropriate description, because of the dark grey volcanic stone used to build many of the beautiful buildings in the town.

Salers has a surprising number of monuments of interest for such a small village, which is due to its role as a local administrative centre in the 16th century, and many of the houses and other buildings are very lovely: this is certainly one of our favourite Auvergne villages and a visit is recommended. 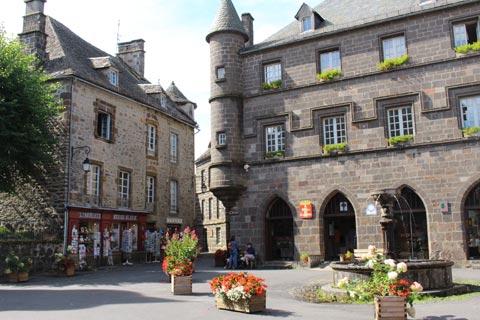 Start your visit in the central square in the center of Salers, the Place Tyssandier-d'Escous. Around this central square there are magnificent and ornate renaissance style houses from the 16th century, the time when the town was at its peak, with luxurious architectural detail in the carved lintel doorways and mullioned windows, and the traditional slate rooves, with their attractive little chimneys.

France This Way comment: even more than many of the other 'most beautiful villages in France', Salers really can cast you back in time as you wander around, with the central square especially being unspoiled by the ravages of time. As a result Salers is a firmly established destination on tours of the region and is often much more crowded than most villages in Auvergne!

Near the Grand Place is a 16th century church, entered by an earlier roman style porch. Inside the church there are several renowned 17th century Aubusson rugs and a 15th century mise au tombeau sculpture which is a very beautiful example of medieval religious art.

In the streets around the centre of Salers you will discover many other impressive buildings and places of interest and lots of historical features such as ancient doorways and windows. The town was originally surrounded by 15th century ramparts, and two of the original gateways through the defences (the Porte du beffroi and the Porte de la Martille) are still visible. The Porte du Beffroi with its clock, bell and campanile is particularly impressive.

To one side of the village there is also a large open area of grass and trees which has a very large vista across the surrounding countryside and is a lovely place for your picnic. 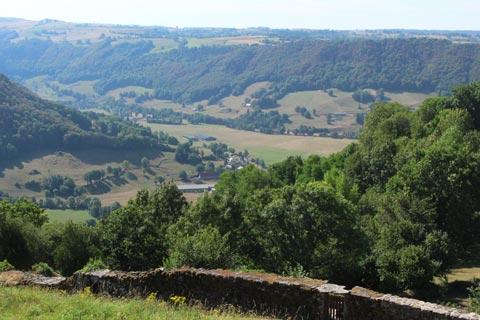 Note: there is also a race of cows called after 'Salers', which you are likely to see in the region, and a version of Cantal cheese (well known across France) called Salers - one of five AOC cheeses in the Auvergne region. These were originally bred by Tyssandier d'Escous, whose statue you can see in Salers.

It is undoubtedly Salers position in the mountains that helps attract so many visitors - 400,000 each year - and provides many of the activities in the region. The region around the village is very beautiful, and ideal for a wide range of outdoor activities.

We enjoyed a stroll around the small village of Fontanges and to see the castle at Saint-Chamant, both a short distance to the south of Salers, and in particular you should also visit the village of Tournemire, another 'most beautiful village of France' and just a few kilometres from Salers.

Map of Salers and places nearby

Visit near Salers with France This Way reviews

Plan your visit to Salers, Cantal

The French version of this page is at Salers (Francais)