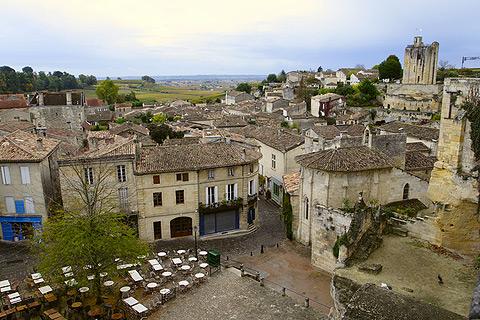 Saint-Emilion is a town 35 kilometres east of Bordeaux in the Gironde department and in the Aquitaine region of south-west France. It is best known (indeed renowned the world over) for the vineyards which surround the town, Saint-Emilion being one of the four Bordeaux red wine regions, but is also an exceptionally attractive small town.

The history of the town dates back almost 2000 years when the Romans planted vineyards here as early as the 2nd century AD, while Saint-Émilion itself dates from the 8th century when a Breton Monk called Emilion came to settle here in a hermitage carved into the rock. The cave where he lived from 750 - 767 AD subsequently became a pilgrim destination.

Saint-Emilion is entered by way of one of the seven gates that are part of the original medieval fortifications. Inside the walls you will discover steep narrow streets with beautiful buildings, and several more open squares, each more attractive than the one before. Saint Emilion is not to be missed if you are in the region!

Built from, or rather hacked out of, the local yellow limestone, Saint-Emilion is centred around a large square with a church on one side. This is a quite remarkable church because it is more or less hewn into the the rock face. You can also climb the steps inside the 53 metre high 13th century bell tower which sits on the square above for stunning views across the rooftops and countryside. 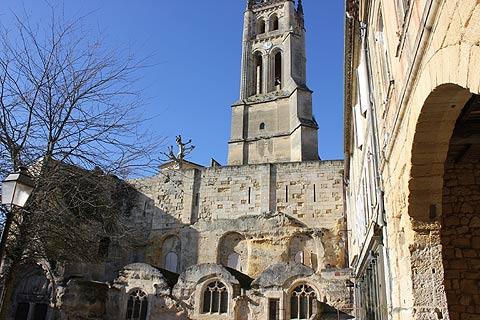 For more views and history you can also climb to the top of the Chateau du Roy, the castle keep that is part of the medieval castle that once stood here.

Other particular places of interest include the collegiate church and its splendid cloister; the Cordeliers monastery and cloister; and the underground pottery museum, built in a 12th century quarry and containing pottery from 2000 years ago up to the present day.

To really appreciate Saint-Emilion you need to descend underground on the guided tour that will show you the catacombs which were used for Christian burials from the 8th to the 10th century; a 'monolithic' church that was carved out of the rock in the 9th century and is the biggest of its type in Europe (this church is nothing like the small cave like structure you might expect from an underground church!), and the 'grotte de l'Ermitage' in which Saint-Emilion spent the last 17 years of his life.

Handy hint: it is said that infertile women who sit in the stone chair in the hermit's cave will become pregnant...

The tour also includes the Chapelle de la Trinité which contains some well preserved medieval frescoes. This tour takes about 45 minutes and is highly recommended.

Emerging back into the daylight there are plenty of cafes, restaurants, artisan shops and boutiques to keep you entertained if the historical interest starts to wane.

Note: I noticed in the Saint-Emilion tourist brochure that they give some 'Helpful Hints', and the very first of these is "Ladies, try to avoid high-heeled shoes as some of the streets are steep and paved with cobblestones". Good advice I'm sure, although I don't remember so many holidaymakers teetering around in high-heeled shoes!

For wine enthusiasts no trip to Saint Emilion would be complete without a visit to one or more of the local wine chateaux. There are several of these that welcome the public for wine tasting - ask for details at Saint-Emilion tourist office.

The tourist office also offer guided tours to a local wine chateau if you are a bit nervous about just driving up to one yourself, and also courses in wine tasting based in the 'Saint Emilion wine school' are available. If all that sounds a bit serious just buy a bottle of wine in one of the local shops and enjoy it with a picnic! 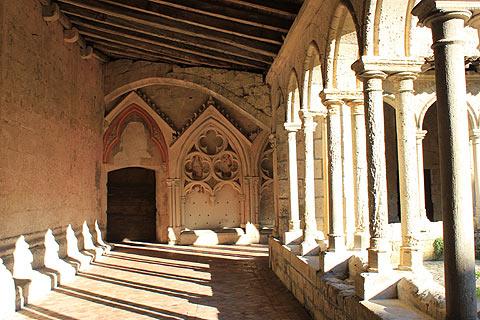 There are numerous wine chateaux nearby and some lovely countryside, but if you are not just here for the wine-tasting the one problem with Saint-Emilion is that there are a limited number of other attractions very close by. Sainte-Foy-la-Grande is a pleasant town to explore and Libourne deserves a stroll but the more noteworthy towns in the region such as Bordeaux to the west and Bergerac to the east are a bit further.

I would suggest that the best way to visit is to stay further east, perhaps near Bergerac or Eymet where there are more medieval towns and villages to visit, and then make a day trip to enjoy the highlights of Saint-Emilion rather than actually plan to spend a week or two at Saint-Emilion itself - or book a night or two in a hotel here if your arrangements allow it.

Map of Saint-Emilion and places nearby

Visit near Saint-Emilion with France This Way reviews

Plan your visit to Saint-Emilion, Gironde

The French version of this page is at Saint-Emilion (Francais)