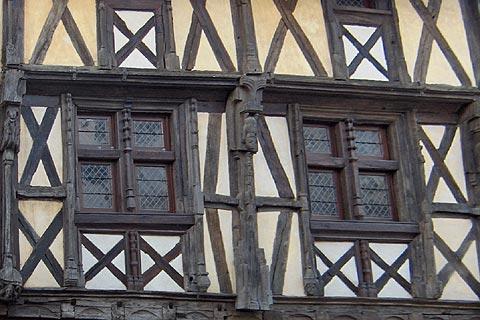 Sainte-Foy-la-Grande is situated in the north-east corner of Gironde, very close to the border with both the Dordogne and Lot-et-Garonne departments.

In Sainte-Foy-la-Grande town centre you will discover all the characteristics you expect in a medieval bastide such as half-timbered houses, a central square with stone arcades around the edges, and a nice church. 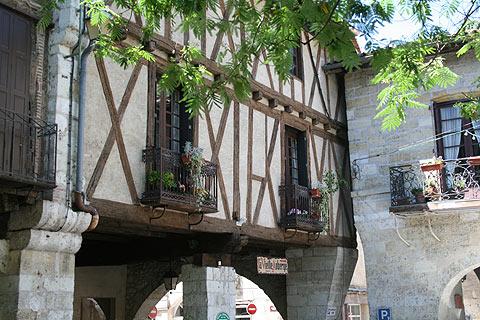 The central square now also contains a substantial 'town hall' building instead of a traditional market hall, which makes it a little harder to appreciate the original layout than in some bastide towns and deprives the centre of the openness we associate with bastide towns.

France This Way comment: for years I had driven straight past Sainte-Foy-la-Grande on the busy road from the Dordogne to Bordeaux without even realising there was a town worth visiting hidden behind the commercial development...but there is, and Sainte-Foy is an attractive 13th century bastide town, with the additional highlight of directly facing onto the Dordogne river.

Sainte-Foy has a good selection of shops and cafes and all facilities and the lively weekly market takes place in the centre each Saturday morning. It is large enough to be a 'living' town rather than a 'tourist town', which brings both benefits and disadvantages from a visitor's point of view.

Sainte-Foy-la-Grande also has a feature that most of the bastide towns don't, because the Dordogne river runs through the town (Eymet to the east of here shares this honour). This is unusual because bastide towns were more commonly situated on hilltops, hence some distance from larger rivers.

It is pleasant to take a short stroll around the quais or even take a boat trip on the river. There is also a small river beach called the Plage des Bardoulets where children can have a paddle.

You can also see some remains of the original defensive ramparts that once surrounded the medieval centre of Sainte-Foy-la-Grande. 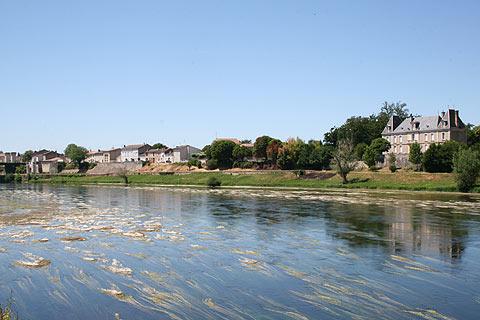 The region around Sainte-Foy-la-Grande, to the west of the Dordogne and east of Bordeaux, is a region of vineyards and quiet countryside that we found to be an excellent region for cycling.

The principal local highlights include a Roman villa at Montcaret where we thought the mosaics in particular were very impressive, and the Chateau de Montaigne, which we were less impressed by but we have to admit to not being great students of Michel de Montaigne.

We strongly recommend a visit from here to the world heritage site village and vineyards of Saint-Emilion , and Sainte-Foy-la-Grande is also well placed to explore the quiet Dropt valley.

Map of Sainte-Foy-la-Grande and places nearby

Visit near Sainte-Foy-la-Grande with France This Way reviews

Plan your visit to Sainte-Foy-la-Grande, Gironde