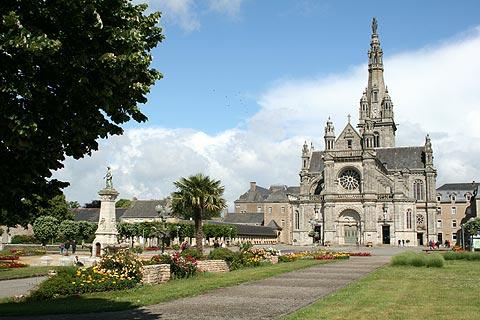 Situated a few kilometres from Auray in southern Brittany, Sainte-Anne-d'Auray is usually mentioned only as a small footnote in travel articles about its larger neighbour.

France This Way comment: I only discovered the town because I happened to be staying in a hotel in Sainte Anne d'Auray when visiting the region, but found it very interesting and recommend that you visit when in this part of Brittany.

An important pilgrimage town, it was from 1623 - 1625 that the current focus of Sainte-Anne-d'Auray was set in motion, when Sainte Anne (the mother of the Virgin Mary) 'appeared' several times to a local peasant called Yves Nicolazic. During these apparitions Saint Anne told Yves where to find a statue of her - the statue was then found on the site of an ancient 6th century chapel. 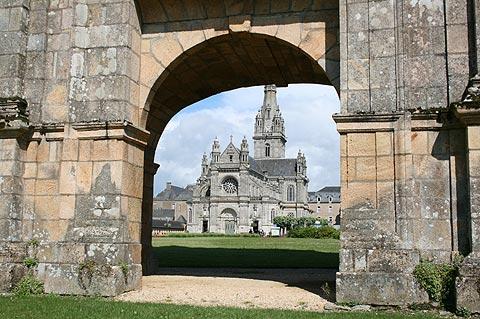 Following this discovery and the ensuing influx of pilgrims, Yves built a chapel and Sainte Anne d'Auray soon became the biggest pilgrim destination in the region. As a consequence the entire town centre was turned over to monuments related to this miracle and the needs of the pilgrims, and there is a fascinating collection of buildings related to the event for visitors to discover.

Central to the complex is a large church with attached cloisters, and you can also see a fountain and a couple of statues, and several grand monuments - all set in extensive gardens - make for a very unusual 'town centre' in Sainte-Anne d'Auray which is well worth a visit.

Not much remains of the original small chapel in Sainte-Anne d'Auray beause it was replaced by a basilica in 1865. The basilica has an impressive bell tower which is 75 metres high. The attractive 'scala sancta' (saint's stairway) was originally in front of the chapel but was moved stone by stone to its new position when the basilica was built.

Apart from the sanctuary and monuments there are a few creperies and a couple of gift shops elsewhere in Sainte-Anne-d'Auray, but little in the way of other sights to detain you. 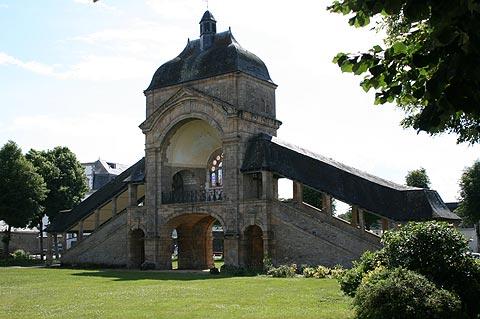 The region around Sainte-Anne d'Auray has an interesting variety of places and attractions for visitors, including the port town at Saint-Goustan (part of Auray), the standing stones of Carnac, the lovely historical town of Vannes and of course the beaches and islands of the Morbihan coast.

Map of Sainte-Anne d'Auray and places nearby

Visit near Sainte-Anne d'Auray with France This Way reviews