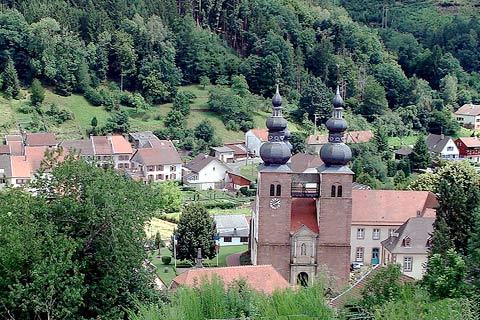 Saint-Quirin is a small village in the quiet Moselle countryside of the Vosges Massif, in the Grand-Est region of north-east France (région historique de Lorraine) about halfway between Nancy (to the west) and Strasbourg (to the east).

The village takes its name from Saint-Quirin, a Roman tribune martyred in 132 AD whose relics were brought here in the 11th century and which made Saint-Quirin an important medieval pilgrimage centre.

The surrounding countryside of rolling green hills and low mountains makes a picturesque setting for the village, officially classified as one of the most beautiful villages in France and with a history dating back more than 2000 years. 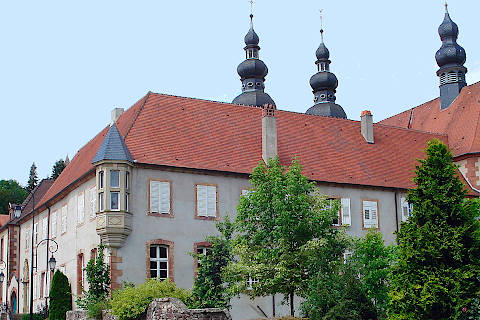 The main highlight in the village, and the monument that dominates the centre of Saint-Quirin, is the church and associated priory originally built in the 13th century. The current church, in baroque style, dates from the 18th century, having been rebuilt after damage during the Thirty Years War.

The church has square towers, linked by a walkway at roof level and either side of an ornate entrance - each tower has a decorative roof consisting of three large balls of diminishing size and other decorative features. Inside the church you can see an organ by the highly regarded organ builder called Jean-André Silbermann.

The facade of the church in Saint-Quirin is quite unusual, with the classical style doorway and columns in light stone, and the towers either side in red brick - it made me think of the ancient temple in Petra in Jordan!

The priory next to the church has a small half tower on one corner. Elsewhere as you explore the village you will see some statues and fountains - the most well known is the so-called 'miraculous source' below a statue of Saint-Quirin with the waters attributed special healing powers.

On a much more modest scale, a five minute climb along a cobbled path takes you to the Haute Chapelle that stands on a hill overlooking the village. From the chapel you also have the best view back down across Saint-Quirin itself. It is said that the chapel was originally built here because it was the place where the mule carrying the relics of Saint-Quirin stopped for a rest. 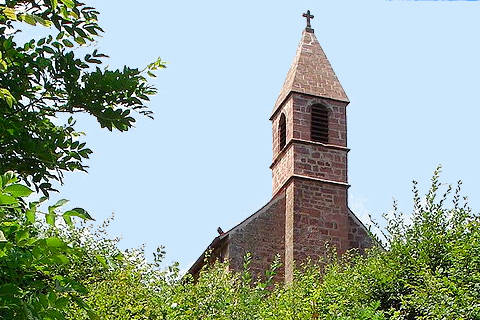 There are numerous walks that pass through the countryside around Saint-Quirin, some of which pass ancient monuments, and it is these picturesque walks that attract many visitors to the village. Among the most popular route is one which passes the church and chapel in Saint-Quirin and also five others in the surrounding region.

More ambitious walkers will want to head for the summit of Mount Donon, the highest peak in the region and with lovely views across the Vosges as well as a curious 19th century copy of a Roman temple.

Saint-Quirin is an interesting contrast to the villages of Alsace a short distance to the east - while staying here we suggest a day trip to visit some of the villages of the Alsace Wine Route. The World War 2 concentration camp at Le Struthof (the only one built on French territory) is about 25 kilometres to the south-east of Saint-Quirin.

Map of Saint-Quirin and places nearby

Visit near Saint-Quirin with France This Way reviews

Plan your visit to Saint-Quirin, Moselle

The French version of this page is at Saint-Quirin (Francais)