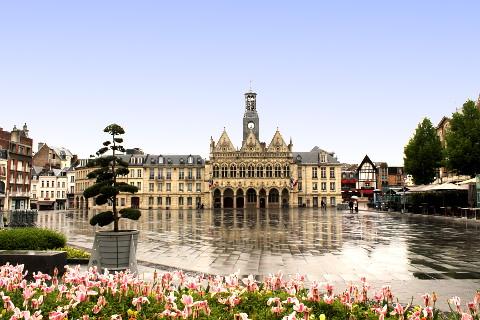 Your visit to Saint-Quentin will centre around the large open square in the town centre, which is close to all the attractions of the town.

The main square is a lovely large open space with large areas given open to attractive planting and to a decorative kiosk. Around the edgs of the square you can see a range of attractive buildings with a range of styles including flemish and art deco. 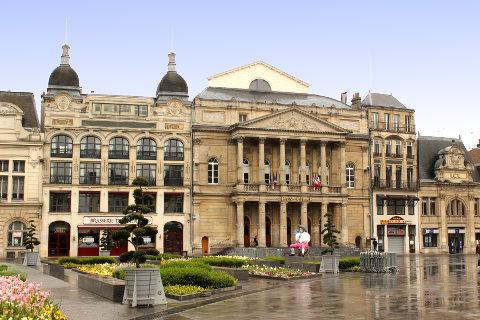 This main square is overlooked by the impressive gothic style town hall, dating from the early 16th century and with hundreds of statues decorating the impressive facade. Its bell tower has an impressive 37 bells the ringing out of which are famous in the area. Inside the town hall there is an art deco council room as well as a wedding room with a polychrome ceiling.

One of the bigger monuments is the Jean Vilar theatre which was built in the first half of the 19th century and has a neo-classical facade. Inside, its ceiling is decorated with scenes depicting Saint Quentin's restoration after much of the town was destroyed in the first world war.

Nearby is Saint-Quentin's other important monument, the 15th century gothic basilica, notable especially for its interior and the art treasures it contains and its small labyrinth. The basilica was badly damaged during the first world war but some beautiful Renaissance windows survived and others were replaced by attractive art deco windows.

Because the town suffered substantial damage during the First World War (approximately 3/4 of the town was destroyed) a great deal of rebuilding was necessary when the war ended, and many buildings were built using the then-fashionable art deco style.

As a result it now has a very substantial art-deco influence that you will see on many of the buildings. Ask at Saint-Quentin tourist information for a leaflet indicating some of the highlights, such as the Music School, the Salle de Conseil, and the main Post Office (Rue de Lyon).

After exploring the buildings of the town centre you can take a stroll also in the extensive 'Champs-Elysees', an extensive and nicely maintained garden and park area. 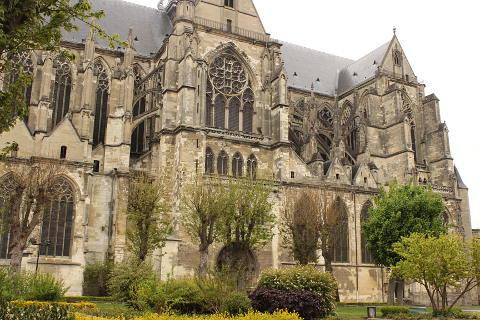 There are several museums in Saint-Quentin, covering a wide range of interests such as:

Saint-Quentin is not far from the wonderful town of Arras with its two beautiful squares in the Flemish style. The town of Reims is also worth visiting to see its historic centre.

Map of Saint-Quentin and places nearby

Visit near Saint-Quentin with France This Way reviews

Plan your visit to Saint-Quentin, Aisne

Regular market(s) are held in Saint-Quentin each Wednesday & Sunday & Friday. (Markets are held in the morning unless stated.)

The French version of this page is at Saint-Quentin (Francais)