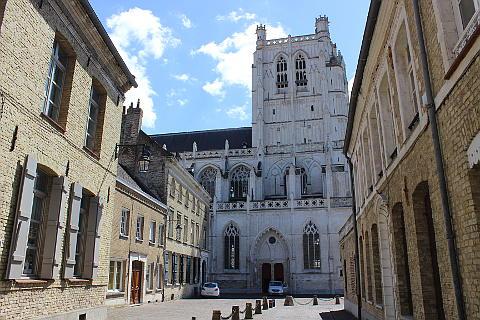 Saint-Omer is found to the south-east of Calais, in northern France. Historically a region of marshes, these were in part drained to create a fertile environment for growing produce and there are now many market gardens in the area.

Saint-Omer has an attractive centre, with numerous impressive 17th century houses and buildings, many in the Flemish style typical of the region, to be admired. At the heart of the town is its large square, the Place Foch, dominated by the neo-classical style Town Hall. In total contrast, inside the town hall is an Italian style theatre with a decoratif mix of colours, paintings and sculptures. 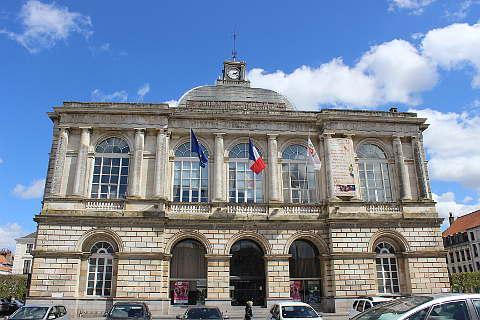 Around the square the other buildings tend to be tall and narrow with heights, width and colour varying enough to be interesting without spoiling the harmony of the square.

Heading east to the Place du Vieux Marché you will find the Museum of the Hotel Sandelin. The museum has an interesting collection of paintings, ceramics and items of historical interest relating the local history. It is housed in one of the town's most outstanding 18th century houses.

Close to here is the Cathedral of Notre Dame, in gothic style and the principal monument in Saint-Omer. Built on the site of an earlier chapel in the 14th-15th century, the cathedral is now one of the most imposing monuments in this region of France. Inside the cathedral you can see an important painting by Rubens, the shrine for saint Erkembode and an imposing 18th century organ.

Over the road from the cathedral are the large public gardens, with a section of the original Vauban fortifications of the town. The gardens are well maintained and with a good range of interesting plants and are definitely worth a visit. The rest of the fortifications were destroyed to create the space for the fashionable wide 19th century boulevards that you see around saint-Omer today.

Heading north in the town other important buildings are the Jesuits College chapel with its unusual tall, narrow facade and the imposing Jesuits College which is housed in a 17th century mansion. The prestigious college has an excellent reputation and attracts students from around the world.

Further north are the evocative ruins of the abbey of Saint Bertin, dating from the 14th century. 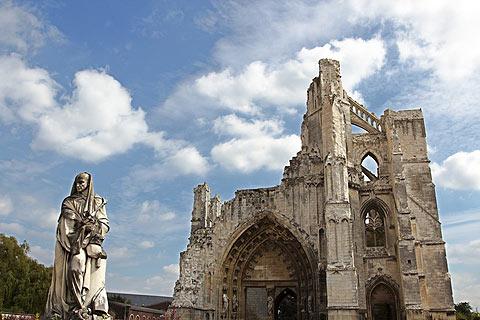 Saint-Omer built its prosperity around ships that sailed up the Aa River to carry out their trade and the canal de Neuffossé and the Quai du Commerce is a very pretty part of town lined as it is with attractive Flemish-style houses.

Nature lovers will enjoy a visit to the protected natural reserve of the 'étangs du Romelaëre', a wildlife area of lakes and ponds that forms part of the Audomarois marshes and is well known for its varied birdlife including herons and cormorants. There is a marked trail through the reserve.

To the west families may want to visit the impressive Nausicaa sea-life centre which is now one of France's top 10 attractions.

Map of Saint-Omer and places nearby

Visit near Saint-Omer with France This Way reviews

Plan your visit to Saint-Omer, Pas-de-Calais

The French version of this page is at Saint-Omer (Francais)