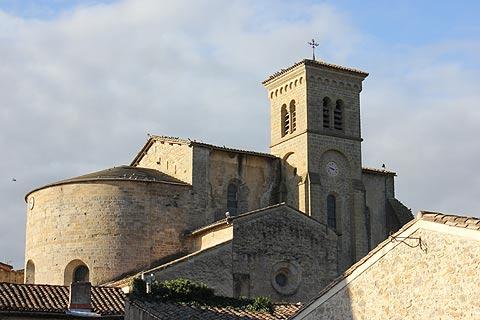 Saint-Hilaire is a small town to the south of Carcassonne. A pleasant town in itself, Saint Hilaire attracts many visitors because of the presence of a jewel of romanesque architecture in the village - the Abbey of Saint-Hilaire.

Before visiting the abbey allow time to explore the streets of Saint-Hilaire - there are several attractive houses, particularly in the streets to the east of the abbey around Place Marcerou and La Placette (the other side of the main road from the abbey).

You should also cross the bridge for a nice view of the abbey and village and to see a poignant memorial to the war with a statue of a grieving widow and her dead husband.

History: Although the exact date that the abbey was founded is unknown it is almost certain that the body of Saint-Hilaire, the first bishop of Carcassonne, was buried here by 825, and probably in the 6th century. From the early 9th century until the 13th century the abbey was prosperous, but the Albigensian Crusade (against the cathars) led to the cathars taking control of the  property and the monks being accused of heresy.

Although the abbey was returned to the church after the heretics had been defeated there followed several centuries of relative poverty, until in the 18th century the monastery was finally disbanded (as with all the monasteries in France after the revolution). 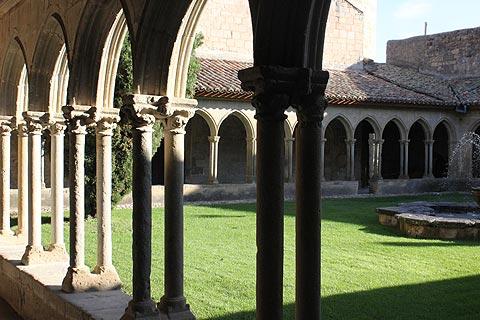 Visiting: The general layout of the abbey consists of medieval fortified walls surrounding the abbey complex, and further houses built between the abbey and the River Lauquet that meanders around the village.

A significant part of these fortifications are intact so be sure to walk around the streets that follow outside the walls - you can see remains of the original gateways, defensive slits which arrows were fired through and also the position of the moat.

The ticket office is in the south-east corner of the cloisters. A small entrance charge is payable to enter the Saint-Hilaire abbey (four euros at the time of our visit). Along a corridor from here you reach the Abbot's apartment, most notable for its very decoratively painted ceiling (16th century) and also for the coats of the arms of the Abbots that are painted on the walls - you might find it surprising that the Abbot liked to live in such luxury when all around him lived in such sparse conditions!

The abbey is centred around a large cloisters area, with a fountain in the centre (added in the 16th century). The cloisters date from the 14th century and consist of 54 pointed arches separated by double columns, each with a decoratively carved capital stone representing animals and leaves. Unusually, the clositers are trapeze shaped.

On the southern side of the cloisters you can access the Monk's refectory, a large room that is now used for occasional exhibitions. The most interesting feature in here is at the far end - take the narrow stairs to reach the small 14th century pulpit that overlooks the main refectory (and sit in the seat to test the acoustics, which are said to be perfect from this pulpit).

A doorway in the south-west corner of the cloisters leads upstairs to the Saint-Hilaire abbey cellars, where the monks produced their wine. In the ceiling of the caves you can see the entrances through which the villagers passed food to the monks.

Finally to the north of the cloisters you reach the door to the Abbey Church. The church is nicely proportioned with a semi-circular apse at one end and contains several features of interest such as the vaulted ceiling above the nave and the capital stones, and dates from the 12th-13th centuries. 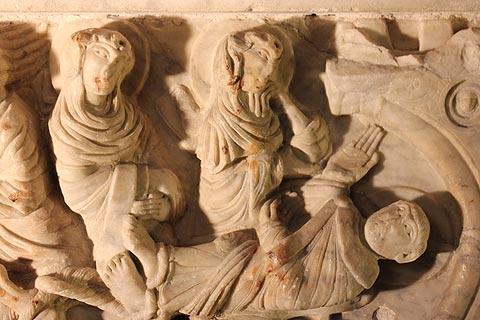 Much the most interesting artefact in the church is a 'sarcophagus' attributed to the Master of Cabestany, an important sculptor in the region in the 12th century. Although his real identity is unknown you can see various works by the master in the churches of Aude.

In fact this is not a true sarcophagus but rather a solid block of marble, with elaborate carvings on three sides that relate stories from the life of Saint-Hilaire, and was probably originally an altar.

The main front of the sarcophagus represents two events of the life of the Saint: to the right, the arrest of Saint-Hilaire (holding a book) by four roman soldiers); and, to the left, his martyrdom - Saint-Hilaire is tied to a bull but still finds the resources to bless two women.

Blanquette: the first sparkling wine in the world, called blanquette, is said to have come from the Abbey of saint-Hilaire, having been made by accident in the 16th century.

Map of Saint-Hilaire and places nearby

Visit near Saint-Hilaire with France This Way reviews

Plan your visit to Saint-Hilaire, Aude

The French version of this page is at Saint-Hilaire (Francais)