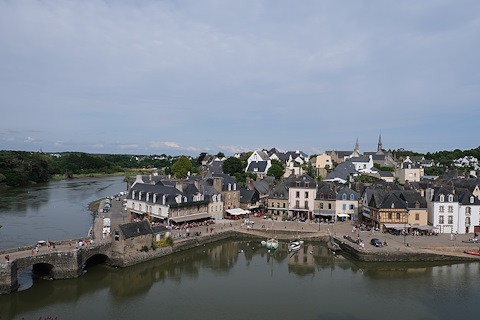 Saint Goustan and adjacent Auray are so closely linked that you will perhaps think of them as the same town, and will certainly visit them both at the same time. Saint Goustan is the 'traditional picture postcard" side of this pair of Brittany towns.

Best described as small yet perfectly formed, the port was originally developed in the 17th century as a fishing port and stands at the head of an estuary that leads to the Morbihan Gulf and Quiberon Bay (hence easily accessible by small boats, which are sheltered from the weather here). Saint Goustan is reached across a pretty stone bridge that crosses the Auray River as it meanders around the port to enter the estuary. Although it appears much older the bridge was actually only built in the 18th century.

On crossing the bridge you immediately reach an open cobbled square (the Place Saint-Sauveur) lined by cafes and restaurants on one side and boats along the river on the other, and one of the most attractive places in Auray / Saint Goustan to stop for a refreshing drink.

There is little chance of getting lost in Saint Goustan! Start by walking along the main street that runs along the river side past the Quai Benjamin Franklin - the Quai is named for Benjamin Franklin because it was here that he disembarked when he arrived in France in December 1776 to ask for French support for the Americans in the American War of Independence.

The quai is no longer used for industry, having long been superceded by the port at Lorient and the arrival of the railways, with the original commerce now replaced by tourism and there are various art galleries, cafes and gift shops here. It takes some imagination to imagine the time when Saint Goustan was one of the most important ports in Brittany!

Towards the end of the quai turn right to find the small street that runs parallel to the port behind the houses and which includes a couple of very old half-timbered buildings.

Back in the main square you can also stroll a little way up a narrow street that runs straight up the hill from here to see more traditional houses, before taking a pause on the stone bridge for a few minutes while you gather your strength to climb the street back up the hill from Saint Goustan to Auray centre.

In fact I should also mention that the best view across Saint-Goustan is from the belvedere in Auray so you really can't avoid climbing up the hill! The port is also a popular promenade in the evening giving you another chance to go up and down the hill...

Most of the most popular places near Saint-Goustan are to the south where you can visit the villages and islands of the Morbihan Gulf; the prehistoric stones at Carnac and Locmariaquer; and beaches at Carnac Plage and La Trinite-sur-Mer.

Less well known to visitors and just a few kilometres north of Auray / Saint-Goustan the village of Saint-Anne-d'Auray is a most unexpected and interesting pilgrimage centre, a sort of small version of Lourdes.

Map of Saint-Goustan and places nearby

Visit near Saint-Goustan with France This Way reviews

Plan your visit to Saint-Goustan, Morbihan

The French version of this page is at Saint-Goustan (Francais)