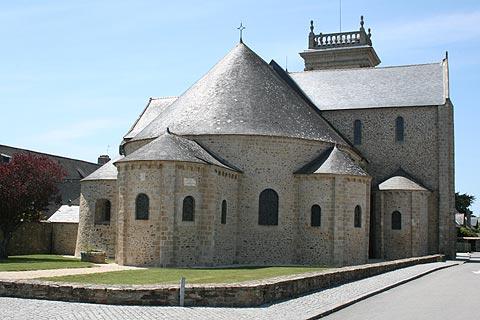 The town of Saint-Gildas-de-Rhuys is situated in scenic countryside to the south of the quiet Rhuys peninsula, on the southern edge of the Morbihan Gulf.

France This Way comment: there is not a great deal to see in Saint-Gildas-de-Rhuys but the abbey hurh is interesting to enthusiasts of roman style architecture, so the village merits a visit as you tour the Morbihan gulf 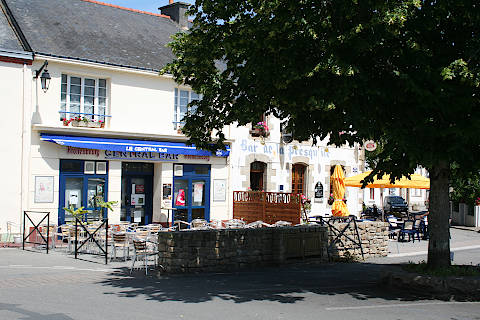 The main reason to visit Saint-Gildas is to see the Eglise-Abbatiale: the abbey church of Saint Gildas. Dating in part from the 11th century it is a very impressive construction that incorporates various architectural styles - the chevet is the oldest part and the in roman style.

The rest of the abbatiale, including the belltower, was rebuilt in the 18th century, in a copy of the original which collapsed in the 17th century. Inside, there are several noteworthy highlights including the stained glass windows and an impressive treasury (open to the public summer only)

The cemetery has a curious design to its stone entrance, but otherwise the town is quite quiet although across the square from the church you will find a couple of cafes. There are also several small art galleries in Saint-Gildas-de-Rhuys, established by artists inspired by the light and the scenery to establish themselves here.

Saint Gildas also has a small harbour, the Port aux Moines. It is naturally sheltered by rocks and was originally used by the monks of the abbey - hence its name.

The main market day in the town is Sunday with markets also held on Tuesday and Friday, and every day during summer, plus a popular evening market on Wednesday's during the summer.

Before leaving Saint-Gildas-de-Rhuys you can visit the Musée des Arts, Métiers et Commerces (Museum of Arts, Trades and Business) which recreates various typical businesses and trades as they were at the end of the 19th century, such as a classroom, butcher's shop, hairdressers and several others.  I have to admit I usually avoid small village museums but this one has made a commendable effort and has more exhibits of interest than I expected. 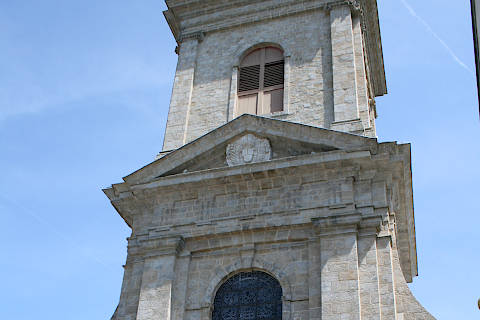 While you are visiting Saint-Gildas-de-Rhuys be sure to head a few hundred metres towards the coast then take the short path to the cliffs for lovely coastal views in both directions. There are also a good selection of beaches and much attractive scenery to enjoy in the vicinity.

Numerous opportunities for walking exist in the vicinity - ask at Saint-Gildas tourist office for suggestions. Cycling is also very popular in the area and there are a number of cycle routes which are particularly suited to children.

Map of Saint-Gildas-de-Rhuys and places nearby

Visit near Saint-Gildas-de-Rhuys with France This Way reviews

Plan your visit to Saint-Gildas-de-Rhuys, Morbihan

Regular market(s) are held in Saint-Gildas-de-Rhuys each Sunday.

A seasonal market is held in Saint-Gildas-de-Rhuys on Monday & Tuesday & Friday. (Markets are held in the morning unless stated.)