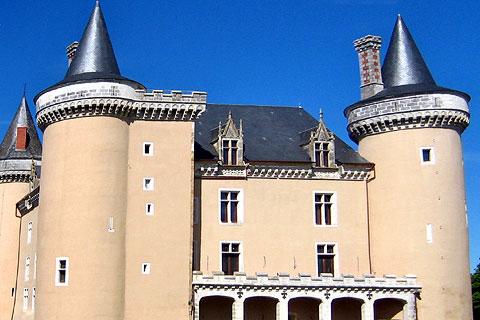 Saint-Chartier is a small town on the river Igneraie and in the natural region known as Boischaut in the south-east of the Indre department, to the north of La Chatre and just a few kilometres from Nohant-Vic.

You will perhaps visit Saint-Chartier as part of a visit to the region that is focussed on George Sand's house at Nohant-Vic. It is a quiet village but there are a couple of monuments of interest to see if you are passing including the little Chapel Barbault and the Chateau of Saint-Chartier.

Literary enthusiasts will be interested to know that this castle provided the setting for George Sand's novel 'Les Maîtres Sonneurs'. It is also said that Napoleon stayed here after the battle of Waterloo and that the villagers could see an important treasure being buried at the castle - although it has subsequently remained undiscovered!

Three clearly defined periods of construction can be seen at the castle , with the original tower dating from the 14th century; several important additions during the renaissance period including the other towers, the living accommodation, the interior courtyard and an arcaded gallery; and further modifications and renovations in the 19th century, such as the addition of lots of windows.

Although the castle is in private ownership and entrance to the interior of the castle is no longer possible the surrounding park, with views of the castle, is usually open - if not you will need to peer through the stone gateway!

This small chapel dates from the middle of the 19th century, and was built by Alexandre Naud (at that time owner of the Chateau) as a final resting places for members of the Naud family. The decorative spire and small towers on each corner are the most unusual feature on the outside of the chapel.

You can also see the small village church of Saint-Chartier, with its origins in the 12th century. Although the church we see today is essentially a 19th century reconstruction after the original was severely damaged during the Revolution, some ancient frescoes can still be seen inside the church.

There are several other locations and monuments close to Saint-Chartier that are also linked with George Sand, and tours based on these are the most common way to explore the local region. Typically these start with the author's home at Nohant-Vic and continue to Gargilesse-Dampierre.

Map of Saint-Chartier and places nearby

Visit near Saint-Chartier with France This Way reviews

Plan your visit to Saint-Chartier, Indre

The French version of this page is at Saint-Chartier (Francais)