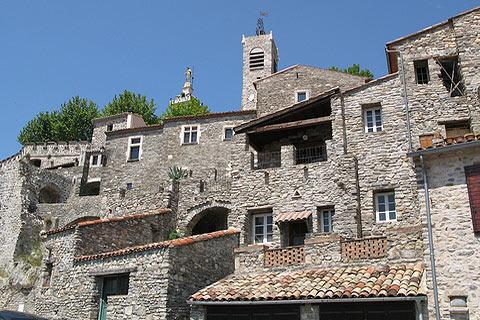 The town of Saint-Ambroix is found in the northern Gard department of Languedoc-Roussillon, close to the border with the Ardeche and north of Alès and Nimes. It is in an attractive location on the Cèze river, and has several sites of interest to visitors.

There are a good number of sites of interest in and around Saint-Ambroix, including several medieval castles and a well preserved medieval centre, and a visit is recommended. We took a trip here from the Ardeche but it is equally practical to visit during your trip to Nimes and Orange.

Most visits start with by exploring the narrow medieval streets of the old town. Along these streets you will notice many features of architectural interst, such as ancient doorways and windows.

As you walk through the old town you will soon notice the curious 'plateau du Dugas', a raised rocky area which has the Chapel of Dugas on top of it and dominates the centre of Saint-Ambroix.

This chapel was built in the second half of the 19th century on the site of a castle that had been largely destroyed in the early 17th century, and in hommage to the earlier building the church has a certain 'castle style' to its architecture, with round towers in each corner and crenelations along its walls.

The tall tower that dominates the chapel has a statue of the Virgin Mary at the top.

An equally deceptive building is the tower Guisquet that stands above the town. At first glance the tower gives the impression of being a remnant of a medieval fort, but was actually only built at the end of the 18th century and never played any role other than decorative.

As with many towns in France that were originally fortified, the fortifications have long been removed and replaced by a broad avenue, as the need to defend the towns gave way to the need to allow better transport access. In Saint-Ambroix this is the Boulevard du Portalet, which features several imposing 19th century town houses and also the Town Hall.

We suggest you visit on Tuesday if possible, since this is market day in Saint-Ambroix, as it has been for the last 650 years. 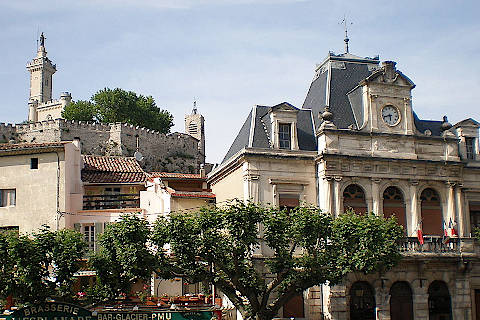 There are several interesting castles in and around the town, with the most impressive being the Chateau de Montalet.Originally built in the 11th-12th century, the castle was substantially modified in the 15th century and has a great deal of historical interest to enjoy - Chateau de Montalet is about 40 minutes walk from Saint-Ambroix, and can also be accessed on foot from Molières-sur-Cèze - check opening times in the Saint-Ambroix tourist office before setting off!

One of the most visited attractions close to Saint-Ambroix (and also in the Gard department as a whole) is the Grotte de la Cocalière, a cave system that includes some lovely caves with stalactites and stalagmites, colourful lighting effects and an underground train journey.

On the river near Saint-Ambroix there is a river beach and a place to hire canoes to explore the Cèze. Hiking and cycling are also very popular here, with the valley of the Cèze river north of Saint-Ambroix having many sites of natural beauty.

There is a great deal to explore in the region, whether you are travelling towards the Gorges de l'Ardeche and Pont d'Arc or Nimes and the Pont du Gard.

Map of Saint-Ambroix and places nearby

Visit near Saint-Ambroix with France This Way reviews

Plan your visit to Saint-Ambroix, Gard

Regular market(s) are held in Saint-Ambroix each Tuesday. (Markets are held in the morning unless stated.)

The French version of this page is at Saint-Ambroix (Francais)