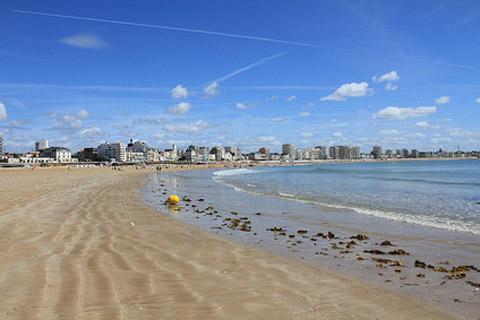 Sables d'Olonne is a popular town and beach resort on the Cote de Lumiere that runs along the coast of the western Vendee department.

One of the most popular of the coastal towns in the region, the main attraction is of course the beach: three kilometres long, and with numerous activities available. If you are looking for the most lively resort in Vendee - and our personal favourite - you will find it here!

Much of the long beach is backed by modern hotel and apartment developments, restaurants and bars,with the part between the lighthouse and the casino being the most lively both during the day time and into the evening as the cafes and restaurants fill with people and buskers play along the seafront. 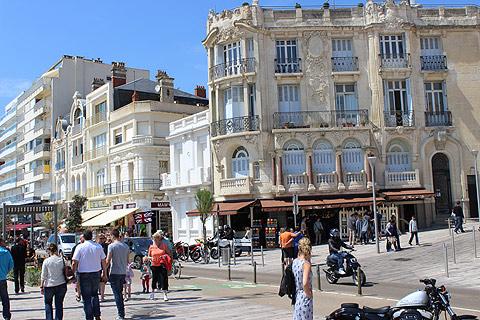 As well as the beach, it is perhaps the promenade along the coast which explains a great deal of its appeal. Somewhat reminiscent of the Promenade des Anglais in Nice (which is perhaps the most famous beach promenade in the world), the promenade in Sables d'Olonne is always busy with cyclist, walkers and joggers and one of the highlights of your visit.

Behind these is the town of Sables d'Olonne itself, the most important town along this section of coast and an active fishing port as well as popular holiday destination. The town has all the activities and facilities you would expect of a busy seaside town. Start exploring perhaps in the Rue de l'Eglise (just west of the Place Dupont).

To the west of the beach and promenade you will also enjoy a walk around the large pleasure harbour. The eastern part of the harbour, called the Quai George Cinq, is less visited but also pleasant to explore. (There are three separate ports here - a fishing port, a port for industry, and the pleasure port of Port Olona).

You can organise your boat trip along the coast from the harbour in Sables d'Olonne, including a chance to sail in a traditional sailing boat.

Other monuments in Sables d'Olonne

Although the beach is the main attraction there are also some sights of historical interest:

In the coastal region called the Chaume you will see the Priory of Saint-Nicholas, which was a church until the 18th century, then a prison, and is now used for various exhibitions and events. The tower that is all that remains of the 15th century Chateau Saint-Clair has now had its tower converted into a lighthouse.

The Church of Notre-Dame in the town dates from the 17th century and is mostly in gothic style, while the Abbey of Sainte-Croix, an attractive 17th century building, has also seen a multitude of uses including a german army base and a library.

There are also various museums in Sables d'Olonne including one dedicated to seashells (!) and another dedicated to local traditions and history. The most interesting is the Museum of Modern Art in the Sainte-Croix Abbey which has a very impressive collection of contemporary art displayed in the original abbey priory. 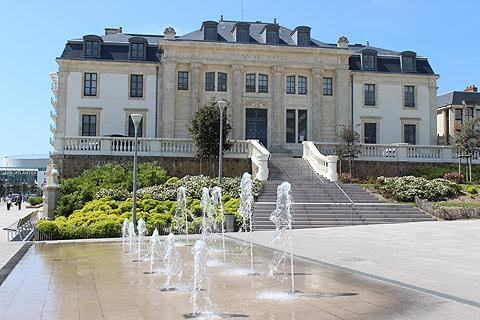 The only problem with visiting is that parking in the centre of Sables d'Olonne is not very easy and not very cheap so can be a problem if you are spending a week or two based in the town.

Sables d'Olonne is also known for the Vendee Globe yacht race - a yacht race around the world - that takes place every four years and starts and ends in the resort.

Attractions in the vicinity

There is a popular zoo in Sables d'Olonne which has a particular focus on promoting awareness of the environment and many protected species of animal some of which are very unusual - we liked the 'Red Panda' and the monkeys, the children liked the long legged 'maned Wolf'.

A few kilometres south of the town on the coast at Chateau d'Olonne there is an attractive viewpoint called the Puits d'Enfer where the beach gives way to craggy rocks.

See more of the popular Vendée resorts and beaches

You can find more travel ideas in the Vendee guide and the Pays de la Loire guide.

Map of Sables d'Olonne and places nearby

Visit near Sables d'Olonne with France This Way reviews

... or see ALL recommended places to visit in Vendee

Sables d'Olonne is classified as a

Regular market(s) are held in Sables d'Olonne each every day. (Markets are held in the morning unless stated.)

The French version of this page is at Sables d'Olonne (Francais)