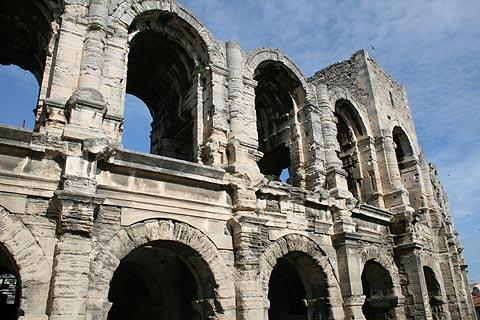 The Roman town of Arles is in southern Provence near the Camargue region. The town was originally founded by the Greeks, then later taken first by the celts and then again by the Romans. In Roman times Arles was the second most important city in the region after neighbour Marseille - the region was very important to the Romans because of its position on the route between Spain and Italy.

Arles then gained pole position in 46 BC fter Marseille backed Pompey during a war with Julius Caesar - Caesar, backed by Arles, was victorious. Arelate, as it was then known, became a very important Roman centre and trading region, reaching its heyday in the 4th and 5th centuries.

The importance of the Roman centre here can still be seen in the important monuments. The most important Roman monuments in Arles date from the period after 46 BC. They include: 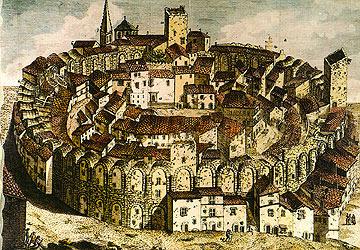 - the arena (amphitheatre), the best preserved of all the monuments, is central in the town. Originally used for major events and gladiatorial combats it is still used for various grand spectacles. During the middle ages the walls of the arena were modified to include defensive towers and the area was used to provide protection and shelter - an entire village was built within the arena itself.

- Constantines thermal baths were part of his grand palace (no longer in existence), and built later than most of the Roman monuments here, in the 4th century. Only a small part of the baths have been excavated, although these are sufficient for us to see how imposing the original baths would have been

- the Place du Forum - 2,000 years later and still the lively heart of the city, although the evidence from roman times is limited to a corner of a building on the square, now incorporated in a more recent building.

- the Theatre follows the usual Roman design, with a raised stage, and a semi-circle of stone benches for the audience, with a wall behind the stage for a background to the performance. The theatre was used for performing plays while the amphitheatre was used for large 'sporting' events. (arles once also had a 'circus' where chariot races were held, but this has now been replaced by the Place de la Republique).

- the Necropolis at  Alyscamps, the Roman burial ground at Arles. Numerous tombs and stones have ben excavated here, although a significant part of the original very extensive cemetery has now become a part of the city. 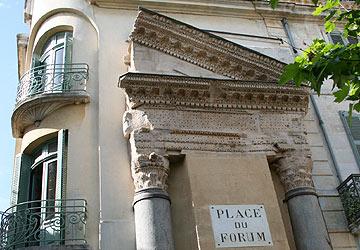 No visit to the roman ruins here would be complete without a visit to the archaeological museum of Arles, which holds some fine remnants and very interesting artefacts

The Roman remains at Arles are now listed as a France world heritage site by UNESCO.

Map of Roman Arles and places nearby

Visit near Roman Arles with France This Way reviews

The French version of this page is at Roman Arles (Francais)