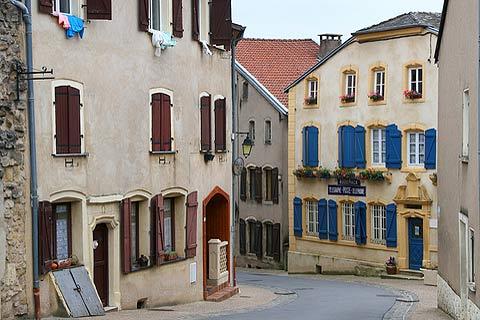 Rodemack is a small villlage to the north of Metz, in the Moselle department (Lorraine region) close to the border with Luxembourg and Germany in northern France.

The village is listed among the 'most beautiful villages in France' and often referred to as 'the little Carcassonne of Lorraine' because of the extensive fortified walls that still surround the historic part of Rodemack.

France This Way comment: it will only take you an hour or two to explore the village and citadel of Rodemack, but it is quite attractive and a pleasant village to visit.

You can enter the village by the imposing gateway (the Porte de Sierck) that passes through the 700 metres of high fortifications, much as visitors have done since the time of their construction in the 15th century. Note the sundial on the tower on the left as you enter. Following the 'promenade des ramparts' of the citadel is a good way to see how imposing these village walls are.

The 'gateway' we see today is formed by an arch between the two towers - this is actually a 20th century reconstruction after the original was destroyed during World War II. Originally there was also a second gateway on the other side of the village but that no longer exists.

Immediately you find yourself in the historic centre of Rodemack, a well preserved medieval environment with numerous picturesque buildings and streets to explore.

Among other buildings of interest, the Maison des Baillis is an imposing house dating from the 16th century. The main church in Rodemack, the Church of Saint Nicholas, is an 18th century replacement of an earlier church on the same site, while the small Chapel of Notre Dame dates from the 17th century.

There is also a reasonably extensive medieval garden below the walls in Rodemack where traditional vegetables and medicinal plants are grown, and a small traditional washhouse (now much restored).

If you visit during the summer there are various medieval reenactment events that take place so be sure to ask for information at Rodemack tourist office.

A few kilometres from Rodemack you can visit the Ouvrage de Galgenberg, part of the Maginot line built to defend France before the second world war. The rather austere concrete entrance conceals a very extensive series of rooms, machinery and tunnels that are quite interesting to explore (with a guide).

Map of Rodemack and places nearby

Visit near Rodemack with France This Way reviews

Plan your visit to Rodemack, Moselle

The French version of this page is at Rodemack (Francais)