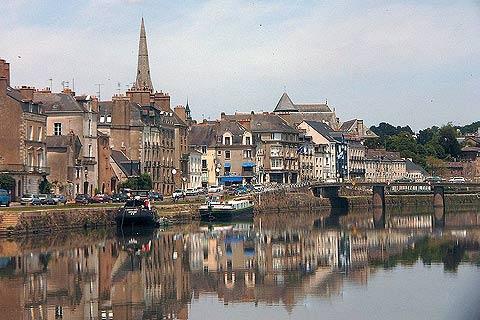 Rédon is a town inland in the Ille-et-Vilaine department of Brittany, in an attractive setting on the Vilaine and Oust rivers. The town is officially listed as a 'city of character'.

Your visit will centre around the port and river facing part of Redon, and also along the main street through the historic centre of Redon, the 'Grand Rue'. Both parts have much to enjoy.

Along the Vilaine riverfront, particularly the Quai Saint-Jacques section, there are many attractive merchant and ship-owners houses dating mostly from the 18th century, and is a pleasant spot to promenade and watch the boats on the river. Redon is also a central point on the Nantes-Brest canal, a popular route with holidaymakers, and the combination of the river and canal permits a large variety of boats to pass through here.

You can organise boat trips along the river and canal from the harbour area in the centre of Redon.

After exploring the waterfront you can visit the medieval centre with its half-timbered buildings. The cobbled Grand Rue passes through the historical heart of Rédon and is lined on both sides by an interesting mix of houses, some half-timbered and others in stone. One of the oldest is the Hotel des Monnaies, at 48 Grand Rue and dating from 1420 and many of the houses have interesting historical features.

Church of Saint-Sauveur in Redon

One particular building of interest in the centre of Redon  is the Abbatiale Saint-Sauveur, next to the Town Hall. The church was built in the middle ages and modified in the 17th century so is an impressive mix of roman and gothic style architecture, with a particularly lovely two-storey roman style tower.

The church also has medieval frescoes and cloisters that were rebuilt in the 18th century. The cloisters are perhaps not as lovely as the original roman style cloisters would have been, but they have retained the arcades and enclose pretty gardens so are still a highlight of your visit. The more recent gothic style tower also once formed part of the church but a fire in the centre of the church in 1780 destroyed the end of the nave - and left the tower standing as a separate monument. 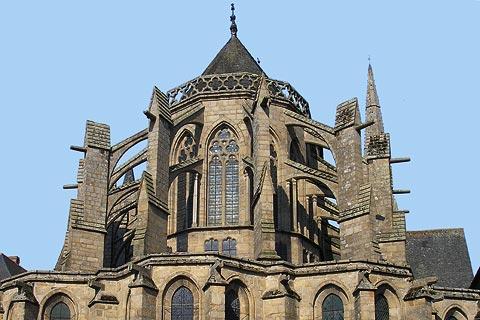 Apart from the general pleasures of exploring Redon, among the particular buildings of note are the Manoir du Mail and Hotel du Richelieu (both on Rue du Plessis) and the 17th century Benedictine convent (26 rue Saint-Michel), and the traditional salt warehouses on Rue du Port.

There are lots of villages of interest, natural highlights and monuments in the region around Redon, with the small artist community at La Gacilly among our favourites. The Vilaine River section between Redon and the historic town of La Roche-Bernard passes through some lovely countryside and is well worth following. The view from the raised viewpoint at Langon is particularly noteworthy.

If you are travelling with children there are two particular animal parks that will be of interest: the Ferme du Monde (Carentoir) has lots of animals such as camels and an animal farm where children can stroke smaller animals, while the Branfere Animal Park (Le Guerno) has larger animals such as giraffes and zebras, and a very large aviary area.

Map of Redon and places nearby

Visit near Redon with France This Way reviews

Plan your visit to Redon, Ille-et-Vilaine

Regular market(s) are held in Redon each Saturday & Monday all day & Friday. (Markets are held in the morning unless stated.)

The French version of this page is at Redon (Francais)