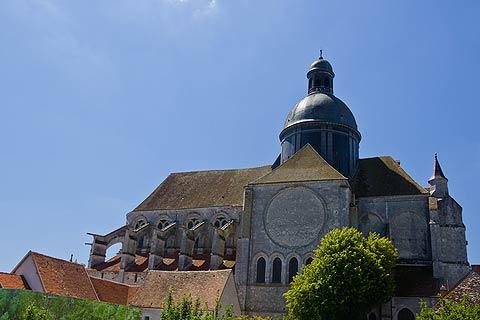 Provins is to the south-east of Paris (take the Metz/Strasbourg motorway to junction 13, then follow the signs for Provins). Although it existed in even earlier times, Provins started to flourish from 996 when the remains of Saint-Ayoul were found in the town, prompting the drainage of the surrounding marshland and the construction of various religious buildings.

The town continued to grow and its markets and fairs during the early middle ages were held in wide repute, with the largest middle-ages fair in Champagne being the one at Provins. However by the end of the 13th century the town's importance had started to decline due to competition from other fairs.

Because of Its heritage as a important medieval market, and the number of buildings remaining from that period - the town boasts an extraordinary 58 listed 'historical monuments' - Provins has been listed as a UNESCO heritage site.

There is still a lot to see in Provins from its medieval period, making it a very interesting and attractive town to visit. The half-timbered houses, the fortifications and churches, along with some subterranean galleries that were once the meeting places of secret societies, all add to the charm of the town. 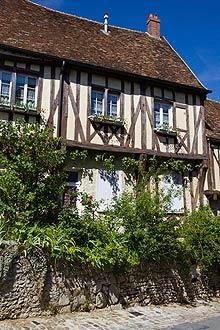 Caesar's Tower is perhaps the highlight of your visit to Provins, on a raised area above the town and having good views over the countryside. A most unusual design, the 12th century tower has smaller round towers on each corner, and was originally a watchtower. The conventional roof on the main tower was only added in the 17th century.

Given the history of the town, the Tithe Barn (the Grange aux Dimes) is also very interesting. The building was historically a 13th century covered market and now features room-by-room recreations of various middle-age trades.

A more unusual attraction in Provins can be found by venturing underground. A large underground hall accessed under the Hotel-Dieu gives access to a series of underground passages. The exact origins of these tunnels is iunknown, but over the centuries they have been used for many purposes including storage and as underground trading areas.

There are also several important religious monuments in Provins, including the large Collegiale Saint-Quiriace which dominates the town centre and the Church of Saint-Ayoul, an 11th century church with an attractive carved entrance that at one time attracted pilgrims here. It was in front of this church that the earliest markets in Provins are thought to have taken place. You should also visit the Cordelieres Convent to see the traditional cloisters.

Elsewhere around the town there are numerous less 'important' highlights, medieval houses, churches and other buildings of interest and a day out in Provins is highly recommended.

Other activities in Provins

After exploring these impressive monuments find time to visit the museum in Provins, which features a very wide range of artefacts covering the whole history of the town. The museum is situated in the Maison Romane, dating from the 12th century and though to be the oldest house in the town.

The town is very proud of its medieval heritage and several festivals and medieval reenactments are held here during the summer months.

Provins has the unusual distinction of making a wide range of products from roses, such as rose jam, rose confectionery and rose honey. This has come about because it is claimed that the first rose was brought here from Damascus by Thibaud de Champagne. You can take a stroll through a nice garden where roses and medieval plants are grown.

A few kilometres west of Provins in the fortified village of Saint-Loup-de-Naud you can visit one of the oldest churches in the Paris-Ile-de-France region, built in the roman style in the 12th century and with impressive stone carvings and statues.

Further west you can visit one of the most popular attractions in the Paris region, the castle at Fontainebleau.

Map of Provins and places nearby

Visit near Provins with France This Way reviews

Provins is classified as a recommended detour town (plus beau detour)

Plan your visit to Provins, Seine-et-Marne

The French version of this page is at Provins (Francais)