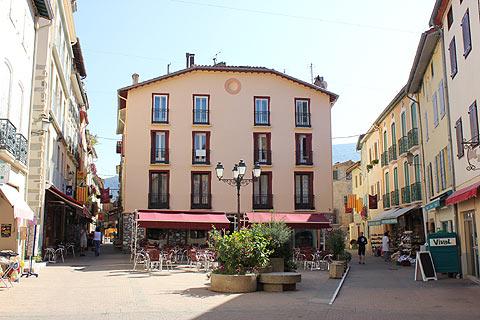 Prats-de-Mollo is an attractive medieval town town in the Pyrénées-Orientales department near the border with Spain and in the Tech Valley. In the town you can explore the medieval centre and an impressive fort and also visit a spa.

Prats-de-Mollo-la-Preste is really two towns - there is the medieval town of Prats-de-Mollo and the spa town of La Preste. The two have been linked since 1959. When you arrive in Prats-de-Mollo, park in the large square called Le Firal and pick up a leaflet from the tourist office on the square.

You enter the medieval city of Prats-de-Mollo through the Porte de France, the main gate and one of five entrances to the city. The Porte d'Espagne on the South side of the town is another of the main gates and if you walk through and on to the narrow bridge outside you can see the arches of the original medieval bridge below. 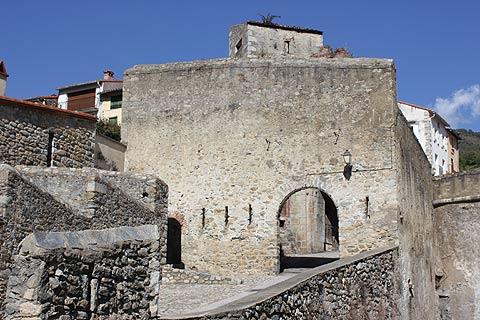 Ramparts enclose the medieval town and these were built in the 14th century though they were destroyed by an earthquake in 1428, rebuilt and destroyed again. In the 17th century they were rebuilt under the instructions of Vaubans engineers. It is possible to walk on some sections of the ramparts.

Inside the Porte de France you enter the charming narrow streets of the medieval town. Steps lead up from the Place d'Armes to the fortified church: this was originally built in 982 but little of the original remains. Note the whalebone sticking out of one of the walls - an unusual offering to the church. There is a rampart walkway next to the church which was built for its protection.

Be sure to enter the little Chapelle des Saintes Juste et Ruffine near the Port de France. This has been very brightly decorated inside by a local artist - Jean Lareuse.

France This Way comment: as well as the individual monuments, you will find that Prats-de-Mollo is a very pleasant town to explore with its cobbled streets and colourful centre: it was a very pleasant discovery at the end of the rather long route to get here!

One of the highlights of a visit to Prats-de-Mollo is its Fort, Fort Lagarde. For me the climb to the fort was of as much interest as the fort itself but be warned - it is not for the unfit! There is a little bus if your energy is flagging. To walk to the fort leave the medieval centre of Prats-de-Mollo through the Porte de la Fabrique and head for the covered pathway.

I had been expecting a rose covered pathway or some such thing but no! It is a narrow, very dark tunnel with holes along its length to let in a small amount of light. It is climbing uphill all the way but at the end it climbs very steeply. So much so that if I had not been wearing sensible shoes with some grip I think I would have been continually sliding backwards. I think children would love it (so long as they are not scared of the dark!).

When you get out of this tunnel there is then a steeper subterranean tunnel to enter, however though steeper I found this easier as it is steep steps and not just a steep slope. All in all a very unusual method of arriving at the fort. There is a path that winds more gradually up to the fort if you are looking for a less dramatic climb of the hill. 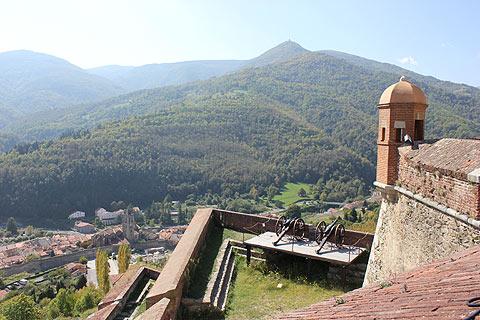 The oldest part of the fort is a round tower built at the begining of the 14th century. This is now in the middle of the star-shaped donjon of the fort which was begun under the direction of Vauban. Vauban was very keen on this star shaped design and it crops up often in his work. Work on the fort continued up until the 19th century.

Whilst visiting the fort, as well as the fabulous views across the countryside and Prats-de-Mollo, there are the kitchens, barracks, dungeon and arms room to see.

La Preste, now part of the sqame commune as Prats-de-Mollo, is a spa whose waters are reputedly good for urinary infections and which also has many beauty treatments.

The Reserve naturelle de Prats-de-Mollo is a nature reserve with a cafe and a picnic area. There are lots of walks departing from Prats-de-Mollo and neighbouring villages.

Not far away are the Gorges de la Fou. The Gorges de la Fou is  the narrowest gorge in the world!. It can be explored by way of a wooden pathway that clings to the edge of the gorge. It has a safety rail and is very safe for children.

In the valley of the Tech, it is just 25 kilometres from the attractive town of Ceret, one of our favourite towns in the Pyrénées-Orientales.

Map of Prats de Mollo la Preste and places nearby