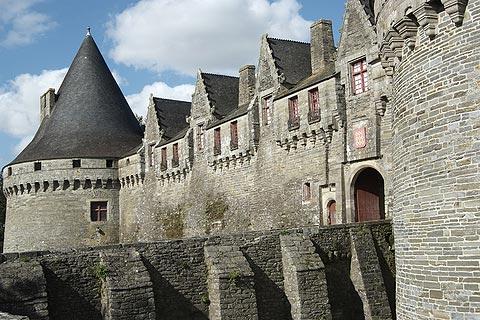 Pontivy is a town in the north of the Morbihan department, in central Brittany and about half way between Saint-Brieuc on the northern coast and Carnac on the southern coast.

To understand Pontivy it is useful to know that from the 15th century the town was an important centre because of the Rohan family, important local lords who were based here. About four centuries later Napoleon decided the town would make a good base and Pontivy had a second period of growth and prosperity, based in part on trade along the new canal between Brest and Nante.

Happily Napoleon developed the town by expanding it westwards rather than by demolishing the existing medieval centre. As a result Pontivy is still divided into two distinct regions today: the medieval section and the Napoleonic section. Each has its own distinctive style places of interest that merit to be explored. 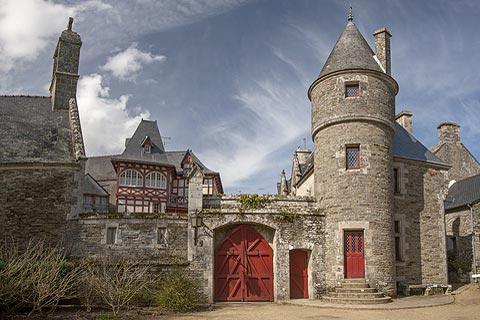 Because of this 'double history' the name of the town has fluctuated between Pontivy and Napoleonville several times during the centuries. The current name is derived from 'pont' (bridge) and 'Ivy' (a monk who constructed a bridge over the Blavet river here in the 7th century).

The heart of the older part of Pontivy is the old town, centred around the impressive 15th century Chateau des Rohan, a medieval moated castle in the centre of the town. The beautiful Chateau des Rohan reminds us of the wealth and importance of the Rohan dynasty, based here during the Middle Ages, and is certainly among the most impressive castles in Brittany.

The castle is surrounded by streets lined with beautiful half-timbered houses, in particular in the old town in the streets to the south of the castle. The centre of this area is the Place du Martray and the surrounding streets. Because Pontivy was a wealthy town for several centuries you can also see various renaissance style townhouses built in stone in the old town. You can follow Rue Guépin to reach Place Anne de Bretagne and continue north along Rue Souvestre, in particular to admire the ornate entrance to the 16th century House of the Senechals.

The 15th century Basilica of Notre-Dame-de-Joie, built in the gothic style, is also in Pontivy old town (although in truth it was rather less imposing than I expected). The more recent Church of Saint-Joseph was built in the 19th century and features some interesting stained glass windows. 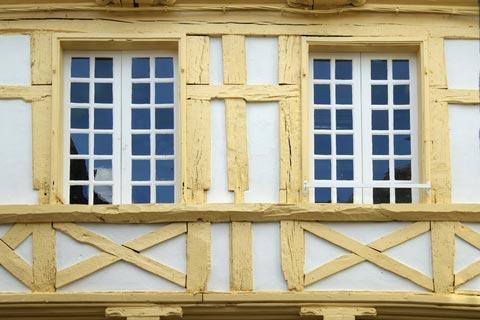 The other part of the town, instigated by Napoleon (and once known as Napoleonville), follows a much more regimented design with straight roads of 18th century townhouses and other buildings. Place Aristide-Briand is the heart of this part of Pontivy.

The Town Hall is among the most distinguished of the buildings from this period. Note that although the town hall was designed under Napoleon, it was mostly built later, under Napoleon III, in the 1850s.

Pontivy is on the Nantes-Brest canal and you might like to arrive on a river cruise through the Brittany region - a very tranquil way to enjoy the surrounding peaceful countryside - or take a boat trip through the region.

If you are staying nearby for a few days there are several interesting historic monuments to visit. As with Pontivy itself these reflect the long history of the region, with the Abbey of Bon-Repos (at Saint-Gelven) and the Chapel of Notre-Dame de Quelven (at Guern) dating from the time of the Rohans and the Abbaye de Timadeuc at Bréhan established in the 19th century, although it is in part established in a much older building.

We also enjoyed a visit to the Forges des Salles, a renovation of a 19th century industrial village of the region and with the surrounding gardens and ponds as much of an attraction as the restored school and other buildings in the village.

Map of Pontivy and places nearby

Visit near Pontivy with France This Way reviews

Plan your visit to Pontivy, Morbihan

Regular market(s) are held in Pontivy each Monday all day. (Markets are held in the morning unless stated.)

The French version of this page is at Pontivy (Francais)