The town of Pezenas is in the Herault department of Languedoc-Roussillon region, north of Agde and 20 kilometres north-east of Beziers in the Val d'Hérault. It is one of my favourite towns in this area and well worth the trip to visit it.

Pezenas has a nice attractive old town, unspoiled by modern development, with narrow streets to explore as well as some grand 17th century houses. Its town centre was one of the first in France to be protected as an historic monument. 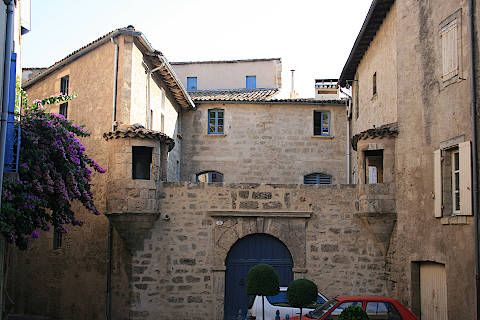 Look out for the magnificent detail as you amble through the lanes. There are example of lovely stone detail to windows and doors, interesting wrought iron balconies and stone staircases. There are numerous imposing houses from the 16th to 18th centuries including the Hotel Jacques Coeur, the Hotel Carion de Nizas and the Hotel de Lacoste among those to look out for.

There is also a well preserved Jewish ghetto in the town dating from the middle ages.

The Tourist Office in Pézenas offers guided tours of the town to help you make the most of a visit. The tourist office itself was once the barbers shop and it was here apparently that Moliere dreamed up some of the characters for his plays.

If you are staying in or close to Pézenas during the evening you can wander through the old town and find a number of inviting restaurants to tempt you. The town is also reputed for its antique and bric-a-brac shops.

The town is especially proud of its association with Moliere, who brought his troupe to the town on several occasions, and has a monument to commemorate the fact by the reputed sculptor Jean-Antoine Anjelbert. Budding authors seeking inspiration can visit the Museum de Vulliod Saint-Germain where you can even see Moliere's armchair!

There is also a Museum of Toys, an Arts and Crafts Centre and an interesting Centre for Architecture and Heritage in Pezenas. Each summer Pezenas plays host to the Mirondela de l'Arte, and music and street entertainment takes over the town.

The market day is Saturday in Pezenas. 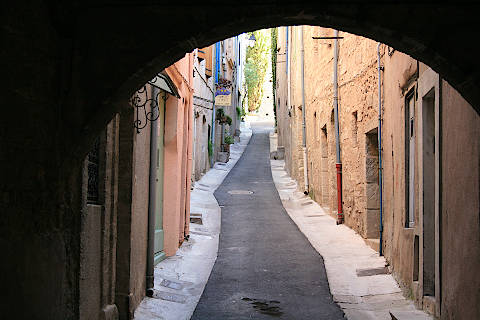 Not to be missed when you are at Pezenas is the nearby (12 km) Abbey at Valmagne, a classified historic monument and very beautiful abbey and cloister.

A tour of the surrounding villages in the Val d'Herault is also recommended - they are mostly quite small and clustered around a medieval church, with each having its own interest and characteristics. among others Caux, Castelnau-de-Guers, Pomerols, Nezignac l'Eveque and Florensac are all within easy reach of Pezenas.

Although Pézenas itself is in the countryside most visitors will want to see the sea at some point! We suggest you visit the resort at Cap d'Agde which has a long sandy beach.

Map of Pezenas and places nearby

Visit near Pezenas with France This Way reviews

Plan your visit to Pezenas, Herault

Regular market(s) are held in Pezenas each Saturday all day. (Markets are held in the morning unless stated.)

The French version of this page is at Pezenas (Francais)