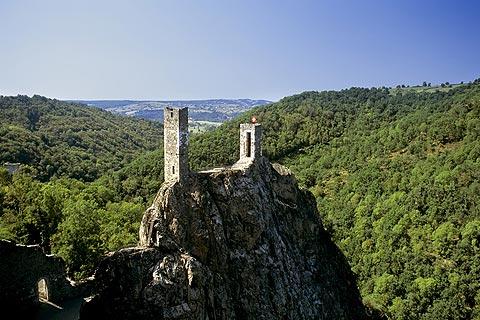 In a remote location in Aveyron, south-east of Figeac and north-east of Villefranche-de-Rouergue, Peyrusse-le-Roc is a small commune with just a few hundred inhabitants.

The location and size of Peyrusse-le-Roc would usually mean that few visitors get here, but the position and surroundings of the village and the numerous sights of interest make the journey very worthwhile: the village is among the hidden jewels of the region with a great deal to enjoy.

In medieval times, and as far back as the 8th century, Peyrusse was a substantial town with 3000 inhabitants, called Petrucia and with a wealth based on the important silver and lead mines that were located here.

Start your visit with a stroll through the narrow streets of the village, entered passed the ruins of the ancient castle, the Chateau du Roy, and its imposing gateway. The road through the centre of Peyrusse-le-Roc passes traditional half-timbered houses and the church, which has incorporated a tower from the original castle as its belltower. You can also see the covered market. 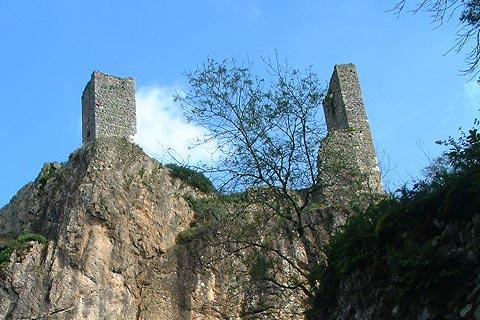 It is the remains of the ruined medieval village beyond the current village that is of most interest at Peyrusse-le-Roc, and volunteers have spent a great deal of time and effort clearing paths and restoring acess during the last 25 years.

Sites of interest include a traditional stone bread oven, various small chapels and a recreation of a medieval garden. The number of monuments, although many are now in ruins, remind us of the importance of the medieval village.

Note that unlike most medieval villages in France, parts of Peyrusse-le-Roc are along quite rough paths and walking shoes are recommended - but be sure to make the effort, because walking through the ruins is a very interesting and evocative experience!

Beyond the village the path continues downwards towards the most dramatic site in Peyrusse-le-Roc, two ancient stone towers standing high on a rocky outcrop and the most famous landmark in the village. Despite the impression you get from photographs, the towers are actually lower than the main village!

The access to the rock and towers is rather perilous for vertigo sufferers, being up a series of steep staircases and rickety old ladders...although the views from the top justify the effort!

Continuing down along the path you pass a small area which has been cleared and where you can now see recreations of medieval weapons. A little further is a square stone tower which is the belltower of the Church of Notre-Dame de Laval which you reach soon after, and the 14th century Tomb of the King.

In the wooded valley below the rock you can see the small River Audierne, and the substantial walls that are all that now remains of the medieval hospital, the Hopital des Anglais.

Cross the river by the Pont du Faubourg and turn right to continue several hundred metres along the river to see the very picturesque roman style bridge of Parayre with its steep hunchback. From here a steep path leads back to the main village of Peyrusse-le-Roc. 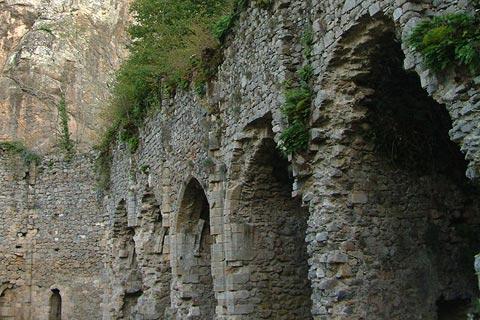 If you enjoy visiting historic towns and villages, there are several of interest near Peyrusse-le-Roc including the beautiful villages of Conques and Belcastel to the east and the impressive historic town of Figeac to the west.

Map of Peyrusse-le-Roc and places nearby

Visit near Peyrusse-le-Roc with France This Way reviews

Plan your visit to Peyrusse-le-Roc, Aveyron