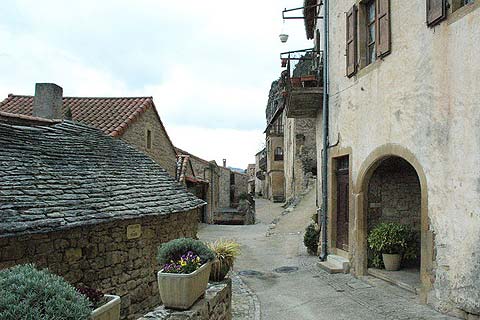 Peyre is a small village situated on the Tarn River a few kilometres west of Millau in the Aveyron department of southern France and within the commune of Compregnac.

As far as I could tell there is no car parking available in Peyre itself and you need to park in one of the car parks a few hundred metres outside the village. Not surprising, given the steep cliffs that rise behind the village! 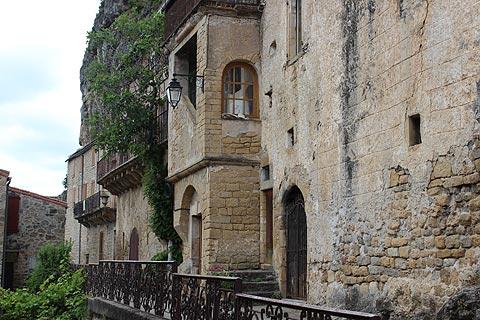 I have to admit that although the village is classified as one of the 'most beautiful villages in France', arriving here is a bit of a disappointment at first because of the train tracks that pass through the village and because the view from Peyre is rather dominated by the Millau Bridge.

But persevere! Peyre is a very attractive little village, with traditional stone houses along narrow streets, some steep and in stone, set against a cliff backdrop. You will also see a good number of troglodyte houses built in the local soft stone (called tuf) and built directly into the soft rock of the cliff.

Peyre is best known for its troglodyte church: the Church of Saint Christophe is the main individual attraction in the village and built in front of a cave in the cliff it looks very much part of the cliff itself. The church dates back to the 11th century in origins and was then fortified in the 17th century. The church is also now used to display occasional art exhibitions and contains some recent (2001) stained glass windows of note.

There is also a good view across from Peyre to the famous Millau Bridge designed by Norman Foster. 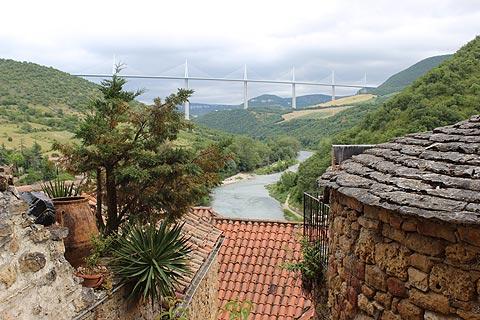 It is possible to hire a canoe and then travel downstream under the Viaduct and passed the village of Peyre.

Most highlights near here are scenic, with the wild landscapes of the Grands Causses and the Chaos de Montpellier-le-Vieux being the highlights close to hand. Another unusual feature you will notice in the countryside around Peyre is the small round stone buildings. Called 'caselles' these historically provided shelter and storage space to the local shepherds.

The landscapes are an interesting contrast to the startling new Millau Bridge. In fact the road from Millau to Peyre passes directly under the bridge and is the best place to appreciate how tall it is!

Map of Peyre and places nearby

Visit near Peyre with France This Way reviews

Plan your visit to Peyre, Aveyron

The French version of this page is at Peyre (Francais)