Perigueux cathedral is an imposing historic monument that dominates the skyline of this town in the centre of the Dordogne department in south-west France. The cathedral is classified as a UNESCO World heritage site as one of the stages on the pilgrim route to Santiago de Compostela.

France This Way comment: although the interior of the cathedral in Perigueux is not very inspiring and the outside is a curious mix of architectural styles, the cathedral is certainly an interesting historic destination to visit when you are in the town

The cathedral is situated close to the Isle river on its way to converge with the Dordogne river, and on the edge of the historic centre of Perigueux. The best overall views of the cathedral are from the bridges across the river a short distance to the south. 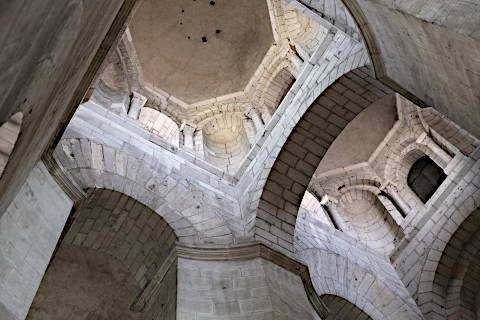 There has been a church in this location since the 6th century, although nothing remains of this early construction. The current church is mostly 11th-12th century, with a substantial renovation in the 19th century by the architect Paul Abadie.

The cathedral has the shape of a Greek cross, with the centre and each side of the cross supporting a large dome, each supportd by pendentives. This is not a common layout for Christian churches but is the same as Saint Marks Church in Venice.

The oldest parts of the church are the current entrance to the cathedral and the part supporting the bell tower: these parts remain from a more simple church that was part of an abbey and largely destroyed by fire in 1120. The pillars in the corner of this entrance (parvis) were added in the 13th century, probably to support a dome that was never built. The square belltower above has three tiers pierced with arches that support a tall dome.

The main cathedral and the domes are behind this entrance and were also added in the 12th century, and incorporate byzantine elments of style as well as romanesque. It is thought that the altar of the original church stood under the central dome.

The decline of Perigueux cathedral started around 1575 when the Huguenots pilloried the building and removed all its furnishings. The ancient relics of Saint-Front thet were originally the heart of the cathedral were thrown in the Dordogne river.

The cathedral was almost entirely rebuilt in the 19th century and the belltower is the principal part of the original structure that you can see today. It was renovated by Paul Abadie, who was later to use a similar style when renovating the Basilica of the Sacred Heart in Paris. The numerous small towers with columns and domes that create the distinct skyline of Perigueux cathedral were added at this stage

Inside, the pillars needed to support the domes are very large: squares with six metre sides. These are pierced by arches so they do not dominate the interior.

The objects inside the cathedral are rather lost in the large and austere interior. Most of the interior furnishings are from the 17th century, and include the altarpiece, the stalls (that were brought here from Ligueux abbey) and the pulpit. There is also a second altar, in marble, that was made in the 18th century; several stained glass windows; and a large 19th century organ.

The 12th century cloister is to the right of the entrance of Perigueux cathedral and it is an attractive cloister that incorporates both roman and gothic style elements. I have been several times and never seen the gate to the cloister unlocked but you can get a reasonable view of the cloister from the parvis and from an opening in the front wall of the cathedral.

To the right of the cathedral there is a garden area with benches where you can enjoy a picnic. 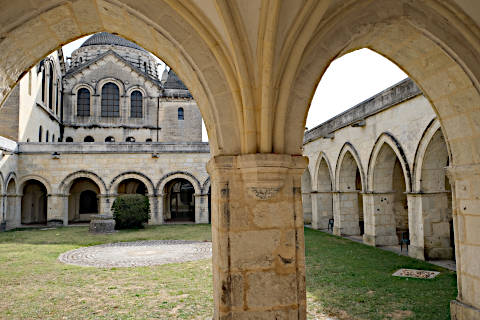 Of course, you will want to explore the historic centre of Perigueux while you are here: it has one of the most extensive old towns in the Dordogne department and is very charming: see Perigueux guide.

Among the other charming towns in this part of the Dordogne, Brantome is quite small but attractive and beautifully situated on the river. You can also visit other cathedrals in France.

Map of Perigueux cathedral and places nearby

Visit near Perigueux cathedral with France This Way reviews

The French version of this page is at Perigueux cathedral (Francais)