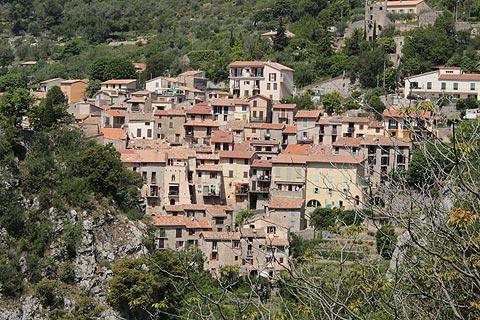 Peille is a small village in a very scenic setting in the mountains at over 600 metres altitude. It is to the south of the Alpes-Maritimes department (Provence region), north of Monaco and north-west of Menton. The village is in quite a remote location but is well worth the effort to visit: it is one of the most attractive villages in the region, with medieval houses huddled together on a steeply sloping hillside and surrounded by forested hills.

As you approach Peille there is quite a large factory in the valley below the village, but luckily this is quite hidden from the village itself so don't be deterred!

The village is largely pedestrianised so park on the edge of the village and explore on foot...Peille can still be entered through a medieval gateway, as it has been for at least 500 years.

The village itself it is a pleasure to explore with the steep and narrow streets lined with medieval houses, some of which are said to date from the 12th century. The vaulted passages in the village add further to the charm and there is an interesting 15th century fountain on Place de la Colle. 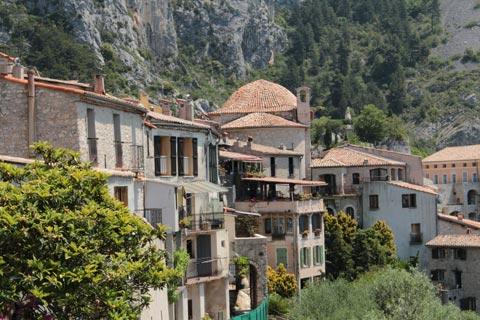 France This Way comment: of course these individual monuments are interesting to see but the pleasure of a visit really comes from strolling along the ancient streets, discovering another beautiful building or view around each corner...Peille is one of our favourite Provençal villages.

There are not many shops in the village but there are at least two or three cafes and restaurants hidden away in the streets.

In the Place Jean Miol on the edge of Peille there is a tribute to events that took place here from 15-20 August 1944. On the 15 August 1944 a local resistance group and other fighter groups attacked the village to liberate it from the Nazis.

One of these insurgents, Jean Miol, was injured on the 16th August and died in hospital on the 20th August, and there is now a small plaque to commemorate the event. It is hard to imagine these events taking place in such a small and isolated village.

One particular attraction for the more adventurous (and well equipped with rock climbing equipment) is the via Ferrata in Peille. This is a route that passes through the surrounding hills and incorporates various bridges, climbs and scrambles with cables and equipment added to make the passage easier - although you still need helmet, ropes, pulleys etc they can be rented from the organisers.

From the sections you can see from the village such as the wobbly plank bridge and the rungs fitted in to the cliff face I am confident this would be fun if suitably scary. I have to admit we didn't do the Via Ferrata ourselves but someone told us it was very good. 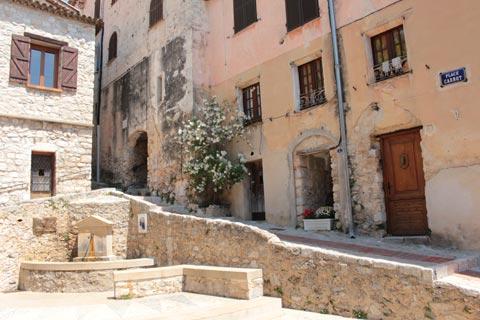 There are several other picturesque hill villages in the region - we recommend that you follow the route Gorbio - Peille - Peillon with side trips to see Sainte-Agnes (east of Gorbio) and l'Escarène (turn right on the D21 between Peille and Peillon).

Map of Peille and places nearby

Visit near Peille with France This Way reviews

Plan your visit to Peille, Alpes-Maritimes

The French version of this page is at Peille (Francais)