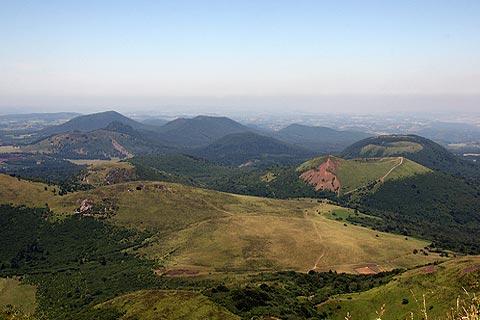 The Parc des Volcans d'Auvergne is situated in the Cantal and Puy-de-Dome departments of the Auvergne region (southern-central France). It is the largest regional natural park in France and includes the familar crest of extinct volcanic domes that crosses the park and is often seen in publicity for the region.

Although many visitors pass through with a quick visit to the summits of Puy-de-Dome of Puy-Mary we suggest you allow a little longer to also discover the special beauty of this relatively undiscovered part of France.

The distinct regions within the park, which extends more than 100 kilometres from north to south, include: 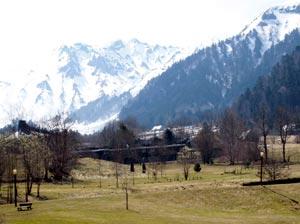 Towards the north of the natural park and running through the heart of the Massif central (west of Clermont-Ferrand), this extensive range of volcanoes called the Chaine-des-Puys includes almost 100 peaks or domes, among which the Puy-de-Dome is the highest,  and is the most visited because of the ease of access and the views from the summit.

It was just 20,000 - 10,000 years ago that volcanoes formed these extraordinary mountains. Around six of the mountains are dome shaped, and there are also numerous craters. To a large extent these domes are now covered in forests, and you will likely have seen them already  - typically on adverts for Volvic Water.

This range towards the south of the park (west of Saint-Flour) includes the popular Puy Mary - an impressive and popular viewpoint at an altitude of 1783 metres and a listed grand site of France that attracts 600,000 visitors each year. The 'Plomb du Cantal' (the highest of the Cantal mountains at 1855 metres altitude) is also here, as is Puy Griou.

The Monts Dore region also centres around a mountain, the Puy de Sancy (behind the town and ski resort of Mont-Dore), and is a region best known for its dramatic valleys and scenic lakes.

These regions, although within the boundaries of the Parc des Volcans, are essentially rocky and rugged plateau rather than a region of extinct volcanoes. The Cezallier, central in the park, is a landscape of open grassland and has an unspoiled beauty, the Artense region (near the Puy de Dome) is rather more mixed with forests and lakes dominating the scenery.

Note: it is useful to remember that the last volcanic eruption here took place just 7000 years ago, when prehistoric man had already long been established in France... 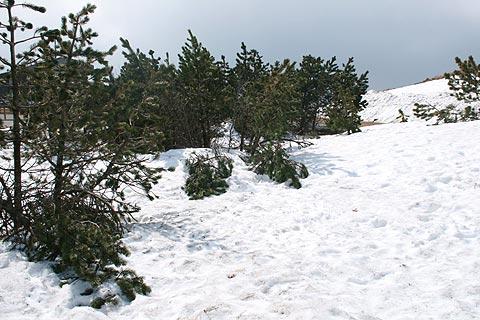 Of course it is for the scenery and outdoor activities that most visitors come here, whether for a quick visit to the peak of Puy-de-Dome, to see the picturesque Chateau de Val on the edge of a lake, or an extended hike across the mountain crests and through the valleys between the soaring peaks.

The setting of the Parc des Volcans has a great deal to offer visitors all year around, with hiking and cycling, horseriding and canoeing, paragliding and fishing all being popular outdoor sports here - and of course skiing during the winter.

While the volcano region is less well known for its towns and villages, there are several of interest - we suggest Salers, listed among the 'most beautiful villages of France', and Saint-Flour and Saint-Nectaire as very typical Auvergne towns, or pehaps the thermal spa and ski town of Mont-Dore.

You will also come across various castles as you explore the Parc des Volcans, for example at Murol, Pesteils and Anjony.

One very popular attraction is the Vulcania Theme Parc, where education about volcanoes is combined with plenty of action and entertainments.

At just 15 kilometres from Clermont-Ferrand the park is in a magnificent setting, and offers everything from gentle discovery walks to action packed videos, from a dragon ride to a re-enactment of a volcanic experience. See Vulcania for details, opening times and prices.

Photos: these show the view from the summit of Puy-de-Dome, the entrance to the Chaudefour Valley, and a snow topped peak in spring.

See more scenic highlights in France. You can find more travel ideas in the Puy-de-Dome guide and the Auvergne guide.

Map of Parc des Volcans and places nearby

Visit near Parc des Volcans with France This Way reviews