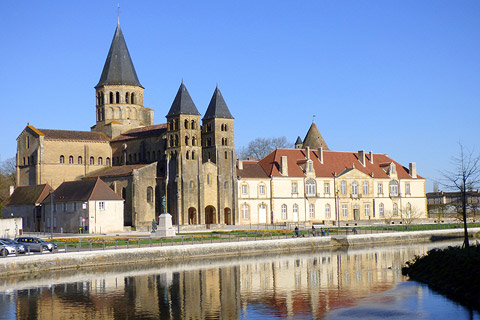 Paray-le-Monial is west of Cluny in the Sâone-et-Loire department. It is an attractive town set in the rolling landscape of southern Burgundy and on the banks of the River Bourbince.

It has been an important pilgrim town since the 17th century when Christ made several apparitions to a local nun, Saint Margaret-Mary Alacoque and Paray-le-Monial continues to attract 100,000 pilgrims each year.

The town has one major attraction, the Basilica du Sacré-Coeur, that makes it both an unmissable part of the tourist trail (it attracts more than 1 million visitors each year) and an important pilgrimage centre, and there are also several other historic monuments of interest in the town.

The basilica at Paray-le-Monial is a well-proportioned roman style church dating in part from the 12th century and completed in the 14th century. Among the most notable highlights on the outside of the basilica are the chevet and associated chapels that are in a sequence of round buildings around the octagonal central tower. The front of the church is rather more austere with two thin square towers either side of a plain facade. 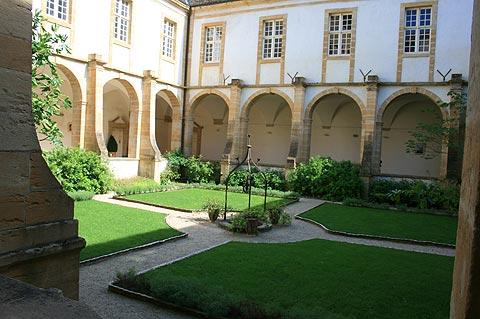 Inside the basilica at Paray-le-Monial there are three knaves and a simple transept. The church makes good use of windows at various levels to allow light to illuminate the interior. Note in particular the decorative capital stones and the painting on the ceiling above the choir. Although many of the capital stones are carved with leaves, very common in roman style churches, there are also others carved with lions, eagles and griffins (lions with eagle heads).

You can also see the abbey cloisters. These were completely rebuilt in the 18th century but retain the original style, as seen in the two doorways into the cloisters. The cloisters also now contain access to a Museum of Faience as well as a centre for pilgrims and an explanation of the history of the apparitions that took place here.

The basilica sits on the river's edge and is a beautiful building in a lovely setting. For those with a fascination in architecture the basilica also provides a glimpse of what the abbey at Cluny would have looked like in its original form.

Other places to visit in Paray-le-Monial

After visiting the basilica you will enjoy a stroll around the rest of the medieval town centre. As you explore you will find various other places of interest in the centre of Paray-le-Monial, all within easy reach of the basilica and near Place Lamartine, the central square in the town. Particular highlights include:

The Town Hall - the 16th century House of Jayet has a very richly decorated facade, covered in carvings of people, columns, shells and cherubs. The facade was built onto the existing building for a rich trader between 1525 and 1528.

The houses around Place Lamartine, dating from the 17th and 18th centuries.

The Chapel of the Visitation - this 17th-19th century chapel was built where Saint Marguerite-Marie Alacoque saw the apparition of the heart of Jesus. The chapel receives a huge number of pilgrims each year. Marguerite-Marie was canonized in 1920.

The Saint Nicholas Tower - this used to be part of a much bigger church but most of the original building has been removed. The bell-tower was added to the church in 1549 and was kept when the rest of the church was dismantled and became the town's clock tower. For about 60 years after the French revolution this building was the Town Hall for Paray-le-Monial.

The Chapel de la Colombiere, a 20th century chapel built in Byzantine style by the Jesuit population of Paray-le-Monial. Inside are some lovely and very colourful mosaics. 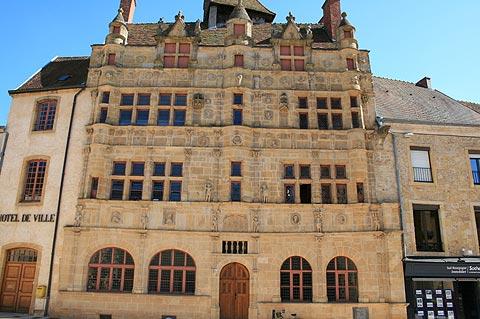 - You can visit the Museum of Hieron, built in the 1890s to house an art collection consisting mostly of 17th and 18th century Italian paintings. It is the oldest Sacred Art Museum in France and houses one of France's national treasures, 'La Vie Vitae' or 'Road of Life' by the Jeweller Joseph Chaumet (1894 - 1904).

- You can also visit the Contemporary Mosaic House and the Paul Charnoz Museum in Paray-le-Monial.

As well as the town itself Paray-le-Monial is well placed to explore the surrounding countryside, a peaceful environment known as the bocage charolais. The town is also a popular destination with those who are exploring the important roman architecture in the region such as the churches at Anzy-le-Duc and Semur-en-Brionnais.

Map of Paray-le-Monial and places nearby

Visit near Paray-le-Monial with France This Way reviews

Plan your visit to Paray-le-Monial, Saone-et-Loire

Regular market(s) are held in Paray-le-Monial each Friday. (Markets are held in the morning unless stated.)